Something that seems very easy to do on others brand of routers, that is bridge the WAN port with a LAN port.

I have done some research but I didn't found a concrete answer regarding if this is possible on the RT-AX86U or any other ASUS router.

Question:
Is there a way to have the IPTV configuration set to manual setting and them bridge WAN port to any LAN port?

I would just learn how to utilize the IPTV settings that you showed above. However, you were asking about a bridge mode so I'm not sure if you want to do it this way but you could manually assign the IPTV device (MAC address) a manual IP from (under the LAN > DHCP Server settings > see below - assign the specific IPTV client and manual IP and then click apply) and next enable DMZ mode for that assigned LAN specific IP address in the Asus router settings under WAN > DMZ. This should fully expose the IPTV client to the WAN. Some clients such as VoIP devices that have their own DHCP server prefer this.
Last edited: Apr 26, 2021
RT-AX86U
A 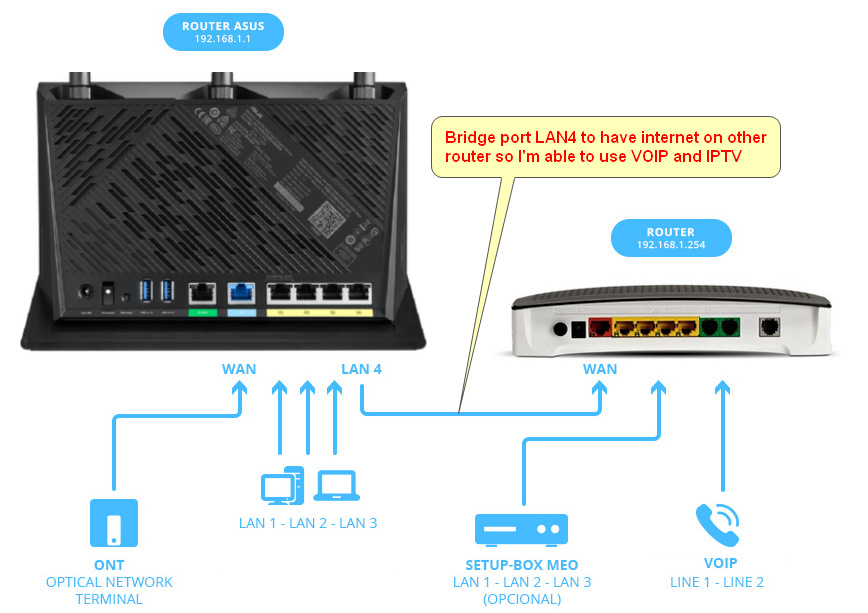 1) I am not familiar with your ISP. You will have to ask your ISP if the setup you are trying to do will work with their network because it looks like your other router is going to be a DHCP server. Some ISP's prefer or require that their equipment is detected and registered on their network for you to utilize their service.

3) Above are the ways I would normally configure the network topology. There might be another way to accomplish what you are trying to do so I encourage input from other forum members.

Note: The terms for "bridge mode" with wireless routers can be confusing. There is the wireless media bridge mode available for Asus routers as described here but that of course is not what you are trying to do.
Last edited: Apr 27, 2021
RT-AX86U
You must log in or register to reply here.
Similar threads