This is the full version of the RAXE500. 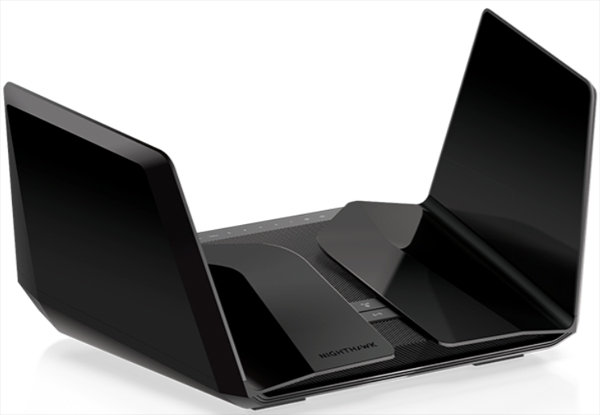 Physical interfaces on the Nighthawk RAXE500 include five GbE ports (1 WAN + 4 LAN), one 2.5 GbE multi-Gig port, and two USB 3.0 ports. Concurrent link aggregation is also configurable by combining the WAN port with one of the LAN ports for 2 Gbps WAN, and then combining two LAN ports for a 2 Gbps LAN connection.

While both NG and Asus released rehashes of their old AX11000s with 6Ghz support, TP-Link on their new AXE11000 model actually added 2x 10Gbe interfaces (one of which is SFP+) and also an additional 2.5 Gbe port, which makes more sense than a single 2.5 Gbe port that can only be used for either LAN or WAN. Wish those two actually did something similar to utilize the overall WiFi capacity. Ulaganath I think besides 6Ghz support the actual WiFi chipset/CPU are the same as before on both NG and Asus's new AX11K models. Don't think the CPU's really gonna be taxed much outside of VPN on these home routers with their feature sets, so it doesn't seem like much of a loss keeping the same chipset.
Last edited: Jan 13, 2021
| ROUTER: SuperMicro AMD EPYC 3251 System (pFsense 2.5.0) | AP: Netgear RAX120 & Netgear RAXE500 | MODEM: Netgear CAX80 | SWITCH: Zyxel XS1930-10 | NAS: Netgear ReadyNAS 524X |
E

This will be woefully underpowered for what Wi-Fi 6E and it's '10.8Gbps', twelve stream design is promising us.
Click to expand...

I thought the processor boost tended to be more about the apps such as plex etc than the wireless.

Not from my experiences. I've never seen or used a router that I thought was 'too powerful'.

Even when the desktop pfSense box I built was behaving like it was supposed to. And thus allowed the RT-AC3100 and/or the RT-AC86U to be used just for Wi-Fi.
Diversion, pixelserv-tls, Skynet, YazFi, scribe, connmon, ntpMerlin, scMerlin, uiDivStats, uiScribe, Unbound, FlexQoS, disk checker, on Ext4 w/J + 2GB swap file
2x RT-AX86U in wired backhaul (2.5GbE) AiMesh mode
https://www.snbforums.com/members/l-ld.24423/#about

Embattle said:
I thought the processor boost tended to be more about the apps such as plex etc than the wireless.
Click to expand...

I feel the same, also basic wireless load is handled by separate co-processors. Considering WAN speeds are still mostly below 1 Gbps for the home user probably, main CPU cores won't make much difference and by the time you reach gigabit speeds one generally is isn't doing QoS anyway (at least most home users), in fact if I'm not mistaken I believe Qualcomm's NSS Coprocessors actually offload much of the QoS work from the main CPU as far back as the IPQ806X (R7800). LAN side of things the CPU really isn't underpowered even under full triband load.

But yeah its pretty much applications like Anti Virus/IDS/IPS/VPN which benefits from faster CPUs, not sure how useful the Anti-Virus and IDS/IPS is though without MITM with much of the web https now. I can't ever recall using my R9000's CPU full tilt on stock firmware other than when PLEX was running. Same with my RAX120, CPU usage is always so low even under full network load, or low enough that the Fan never turns on. I suppose if you install something like OpenWRT and use a lot of intensive packages, routing across multiple VLANS etc it may have more of an impact. However as mentioned none of the consumer routers really have much of a feature set to push the limits at the moment from what I see, aside from custom firmwares. So it's probably not yet cost effective to move to the latest/greatest CPU containing chipset that's available. Consumer router side I believe the BCM chipset with Quad Core Cortex A57 is the most powerful, but I have not seen it in any products yet and I can imagine the thing would run much hotter with higher power draw than the A53s for little gain in a home router. I doubt Cortex A76/77 (High Power) or A55 (Low Power) series will come just yet, as there's usually a decent lag period of a few years between the latest ARM cores in phones/tablets and what shows up in routers.

The CPU on my RAX120 runs high under a few conditions.

1. WAN Link Aggregation - I have gigabit Internet (1000 up/50 down) through Sparklight (used to be CableONE) and a Motorola MB8600 cable modem that supports LAGs. If I turn on the LAG functionality in the MB8600, and also configure the RAX120 to use WAN LAG, the CPU will hit, and maintain, high CPU usage (as in >90% CPU usage!... basically pegs the CPU) during high Internet usage. When I say high Internet usage, I am talking gigabit Internet speeds (during downloads, speedtests, etc). From my discussions with Netgear, their LAG implementations (for both LAN and WAN) in their consumer routers are achieved through software (thus the high CPU usage) versus hardware (like in their business switches).
2. Netgear Armor - I use their Netgear Armor cybersecurity technology. I notice high CPU usage (around 50% +/- 10%) when new devices connect to my network, vulnerability scans are running, etc. It's not all the time, or very often really, but the Armor stuff does seem to utilize quite a bit of CPU at times.
3. OpenVPN - I haven't used OpenVPN on the RAX120 very much (it's actually not even turned on at the moment), but it definitely used quite a bit of CPU when I did use it. That was many firmware revisions ago, so things may have changed here.

avtella said:
While both NG and Asus released rehashes of their old AX11000s with 6Ghz support, TP-Link on their new AXE11000 model actually added 2x 10Gbe interfaces (one of which is SFP+) and also an additional 2.5 Gbe port, which makes more sense than a single 2.5 Gbe port that can only be used for either LAN or WAN. Wish those two actually did something similar to utilize the overall WiFi capacity. Ulaganath I think besides 6Ghz support the actual WiFi chipset/CPU are the same as before on both NG and Asus's new AX11K models. Don't think the CPU's really gonna be taxed much outside of VPN on these home routers with their feature sets, so it doesn't seem like much of a loss keeping the same chipset.
Click to expand...

Pair the TP-Link Archer AX206 with a Motorola MB8611 (both of which have 2.5Gbe ports), along with a Netgear MS510TX switch, and a person could actually have a network that could not only achieve >1Gb Internet speeds but also have a LAN that could actually make full use of it by a single wired device. Something not yet achievable.

I say all of this because many ISPs (including Sparklight) over provision their Internet speeds (Sparklight does by 15%, even on their gigabit plan). A friend of mine has an MB8611 and a RAX120 that achieve >1Gb speeds (roughly 1150 Mbps) when running speed tests inside the Nighthawk app. Unfortunately, the RAX120/RAX200 (among all the other AX consumer routers currently available from Netgear, Asus, etc) only have one port that's >1Gb. Many of the higher end consumer AX routers support LAGs, but that's not the same... not by a long shot.

This TP-Link Archer AX206 is interesting... quite interesting indeed!

Staff member
Folks, this thread has wandered off topic. Back on topic please.
Tim Higgins
Managing Editor,SmallNetBuilder.com
U

6e has wide bandwidth but only still achieve 4.8 gbps with how many stream I don’t get it . If I see generation

That’s a very long article but keeps interesting while reading yes marketing gimmick is well known fact total throughput is combined band and no such is practically feasible one use 2.4 or 5 not both at same time . More over head reduction of actual transfer on link rate .

Staff member
Wi-Fi 6E is just Wi-Fi 6 with support for additional channels in the 6-7 GHz range. So the same link rates apply. Maximum 80 MHz rate for 4 streams is 2402 Mbps, for 160 MHz, it's 4804 Mbps. Divide those numbers by 2 if you are using a two stream client device.

Your question about 160 MHz support for ac and ax has been asked in another thread. The answer is that the AP must support DFS channels because devices that support 160 MHz channels require 8 contiguous channels. It doesn't matter whether the device is AC or AX. It just has to support 160 MHz.

Note only contiguous 160 MHz channels are supported in the 6-7 GHz band.
Tim Higgins
Managing Editor,SmallNetBuilder.com
U

Staff member
NETGEAR has started shipping the RAXE500. It's exclusive to NETGEAR.com for the first month. Price is $600.
Order up? https://www.netgear.com/home/wifi/routers/raxe500/
Tim Higgins
Managing Editor,SmallNetBuilder.com

I do not really understand how they can release a 12 Streams Router when they can not even offer a 4x4 AX on both bands WIFI cards / dongles one need to get this speed. I have never seen 12 Streams WIFI cards / dongles, one may wonder for whom they make these WIFI Routers. Tired of this exaggerated advertising against what a router can do in reality.
Last edited: Apr 3, 2021
Internet - 100/100 fiberoptic
You must log in or register to reply here.
Similar threads