Curious if anyone has encountered a similar issue or if anyone may know where should I start looking in order to troubleshoot this issue and figure out the root cause if this issue ever happens again (first time this has happened though and I have been running with this firmware and configuration for a few months). Not sure if it could be due to the cable (though just doing a reboot of the router resolved the issue so I'm not sure...)

Issue (happened after several weeks of uptime since last reboot): 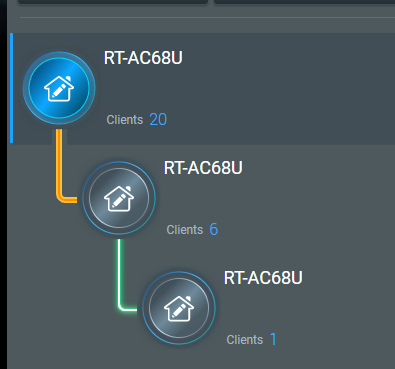 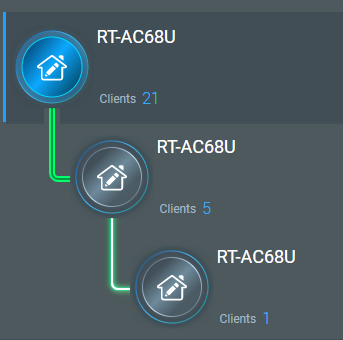 Legend of what the different colors mean:

Let me stress that I am not an expert. I know enough to be dangerous, but am just trying to be helpful. So if someone else who knows more contradicts me, believe them. However, I have an identical setup (only with 88U's instead of 86U's) and I don't have this problem. The IEEE protocols for Ethernet transmission have speed negotiation as part of the protocol. So it's perfectly reasonable to assume that upon powerup, it sucesfully negotiates a speed of 1GHz, but after a few minutes the communications are problematic so they negotiate down to 100MHz and remain at that speed, until a reboot when negotiations start from zero.

Are the cable connectors factory made? or home made? I've seen a lot of people do some pretty crappy shortcuts with the shielding when attaching the connectors at the ends of the cable themselves, and shielding is needed to get the 1GHz speeds but not for 100MHz speeds. Belden.com has a video tutorial on how to properly land both braid and foil shield cables, if you're doing it yourself. With that said, my cable terminations are home made and I suck at this. They look terrible, and yet it works fine.

Also keep in mind that IEEE calls for 4 feet (ok actualy it's 1.1 meters) of separation between power and signal cables at all points if only air is separating them. That's pretty hard to do in a residential home where you don't know where the wires are run inside the walls and you don't want to run conduit in your house, not to mention have power cables everywhere in the back of any entertainment center. But still you might follow the cable run with one of those el-cheapo 120V presence testers you can buy at Home Depot for $10 to see if it ever runs parallel to a power cable for any significant length, and if so look at an alternate way to run the cable.

However while not likely, I wouldn't rule out firmware bug either, only because I saw similar, but much more severe issues with the earlier beta builds of 386 firmware that were fixed in later betas, with the 88U, but to my knowledge nobody complained of those issues with the 86U during testing.

Both with many fixes implemented since your version was 'fresh'.
Click to expand...

I am off site majority of the time and try to do most of my firmware upgrades when I'm on site. I have done some upgrades while offsite but I try to limit it since if something goes wrong, it will be several magnitudes of more effort to fix it while not physically there. At the moment, not sure if I need to yet but if this becomes problematic enough, I will try it.
C

Moabdave said:
Also keep in mind that IEEE calls for 4 feet (ok actualy it's 1.1 meters) of separation between power and signal cables at all points if only air is separating them.
Click to expand...

ColinTaylor said:
Interesting. Do you have a link for that? The UK regulations (EN 50174-2 and BS 6701) suggest a separation of 200 mm for unscreened power and data cables (for domestic mains wiring).
Click to expand...

The standard is IEEE 518. However, to be fair I I work in industry, and was taught the values for industrial environment, where power mains are often 460-4kV or even 7kV. I was never taught the values for 120/220Vac domestic mains and would have to take your word for it. But agreed the 1.1 meter seperation is excessive for a house and I should have said that, I was trained industrial numbers. However, I think your numbers sounds right. If I look at the existing wiring in my house (i.e. the old analog land-line phone wiring + CATV) they are all seperated from the power outlets by about that amount. And my house is wood frame, and it looks like they are all intentionally on the other side of a wooden stud from each other, so they have at least a little more than just air separating them.
Last edited: Jun 7, 2021
You must log in or register to reply here.
Similar threads