There seems to be a bit of a debate on whether the addition of cooling fans are recommended for ASUS Routers such as AC68U, AC86U, AX86U etc. I have read both sides - either saying what seems hot is nowhere near touching the throttle, or saying heat/temperate is the reason for the many reports of WiFi radios dropping. Some say it’s not wise to add fans as they blow dust and other particles into the router which eventually cause more harm than good and/or are worse for the device than the heat (as well as noise).

My question is if anyone has experience in adding fans and if they make a noticeable difference to operation of these Routers? Can anyone who had WiFi issues (annoying drops every now and then, requiring reboot) say if adding fans improved this? Has anyone tried using fans in exhaust configuration (drawing air away instead of into the router) and was the temperature difference significant?

Many seem to be running Merlin with various add-ons and have no issues at all but I have seen enough posts about the WiFi radios to call it an actual issue and I have experienced them myself even with just a few devices connected. A hard reset has been recommended by many and it is something I will be trying, but I wanted to hear from those using fans or those with experience in adding them.

Lots of discussion on this already

Hello everybody With this release, temperature of my RT-AC86U has risen again. It's around 96°c. and logs shows CPU turned off due to excessive heating. CPU Wait is ENABLED. Anyone else experiencing this? Thanks

For me, it's about longevity. I tend to hang on to my devices for a very long time. I got my ASUS RT-AC68U about 3 1/2 years ago (a router that has been around since 2013), and I have no intention of upgrading anytime in the foreseeable future. It works flawlessly. Best router I've ever owned. And to that end, the cooler it runs, the longer its physical life. In my opinion, heat is the enemy of electrical devices in general, and wireless in particular. Dust? To the extent it's a threat, I (carefully) blow out all my PCs and electronics at least once a year w/ a compressor, just in case.

As far as wireless, when *I'm* referring to this issue, the purpose of a fan has less to do w/ making wireless run better in real-time, and more to do w/ NOT have the wireless deteriorate over time, which leads to progressively less reliable wireless. If heat is indeed the culprit, by the time the wireless has become unreliable, it's probably already too late. And so adding a fan is probably NOT going to make much of a difference. But as they say, the proof is in the eating, so if you are having problems, try it and see what happens. It's so darn easy and inexpensive to do.

FWIW, and in the name of science, I took the fan on my RT-AC68U (it's a second one I have serving as a client bridge) and reversed it to blow away from the router. When blowing in, temps drop from 73C to 55C. When blowing out, it only drops to 62C. So pretty much what you'd expect. But if dust is a concern, still good enough to warrant consideration (don't let the perfect be the enemy of the good).

In summary, this is an endless debate that will never be resolved. Everyone has an opinion, and no one has sufficient proof to prove one side is right or wrong. I say just trust your instincts.

In short, definitely better overall stability with a fan on main router after transition to hotter running 386.1 release.
But I am biased
2xRT-AX86U, Merlin FW, AI Mesh

I started running fans on my router back with my RT-N16. Took an old 386 CPU fan and an old USB cable that I spliced up to power it on 5V so it ran slower (12V fan).

I put little rubber "dots" in the 4 corners as feet/vibration dampers and set them on the top triangle blowing in. I keep meaning to find something that spins more slowly and/or add a speed control but never seem to get around to it 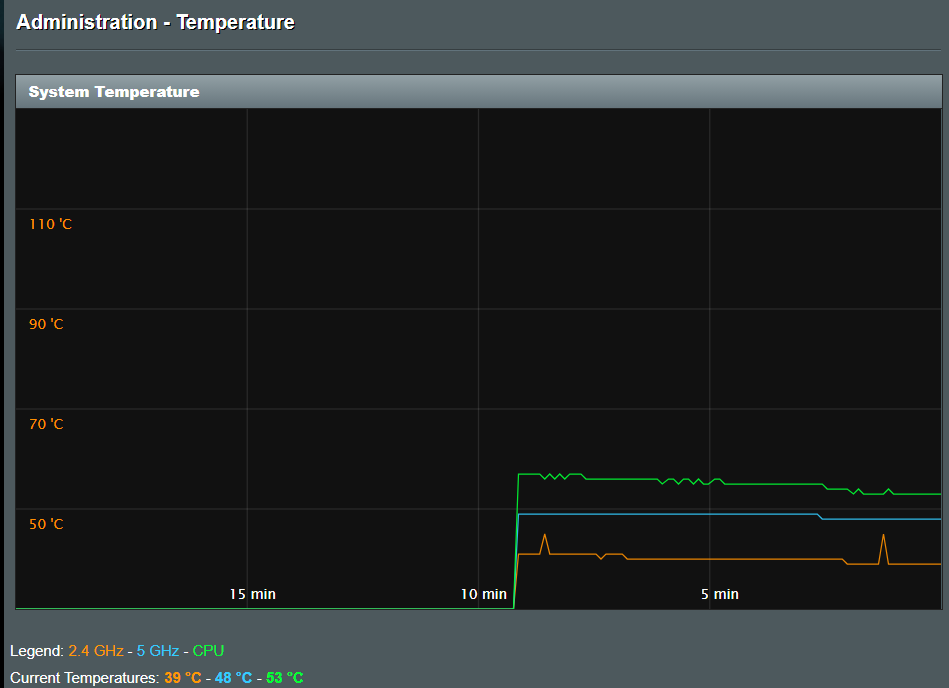 I did a little experienment a while ago. I have some Zen WiFi XT8 throughout the house. One of them is placed in a room next to a rooftop garden (can get quite hot during summer), and one is in a guest room two stories below the roof.
I use a fan to cool down the one in the rooftop room, and I measured the temp for 3 days, below is the measurements of CPU temps of each routers and the air temp in celsius. "Roof" is the fan-cooled router's CPU temp, and "Guest Room" is passive-cooled router's CPU temp.

I added the fan to the router hoping that it can last longer, becasue the rooftop room can get quite hot during summer time.
Last edited: Apr 2, 2021

eibgrad said:
Everyone has an opinion, and no one has sufficient proof to prove one side is right or wrong.
Click to expand...

I had to take a picture of the full bin with dead AC86U routers. This model has the worst heat transfer design and dies more often. It's the first HND platform Asus router on the market and things didn't go very well in terms of longevity. Asus perhaps improved the materials used in later AC86U models to address the issue. Similar design AX86U uses different color thermal transfer pads and perhaps better fit main heatsink. Here is a modified AC86U with copper shimmed CPU and increased airflow, 12V 120mm fan running on 9V behind the router: 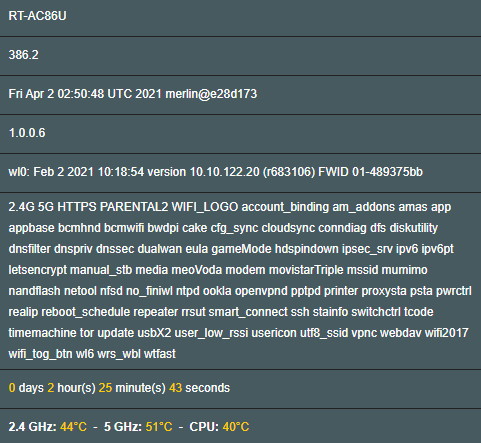 BTW, I finally broke down and installed these on my 3100's and AX88 to control the fan speed. So far I've been able to reduce the noise and speed without raising the temp. I'll report back if they begin to fail.

https://www.amazon.com/gp/product/B07T35R51R/?tag=snbforums-20
You must log in or register to reply here.
Similar threads