How does the Dedicated Wireless Backhaul work when combining a dual band and tri-band router?

When creating a wireless mesh, you get a dedicated backhaul over 5ghz with the SSID: "yournetwork_dwb".

The only node I have trouble with is the tri-band at the opposite end of the house - even through it has Great signal at all times. I feel there is a problem with the _dwb.

You can see RT-AC5300 says its backhaul is "_dwb" BUT the dual-band RT-AC88U is not offering that, it offers only the 2.4GHz and 5GHz to devices, and not to the AiMesh nodes - per the UI. 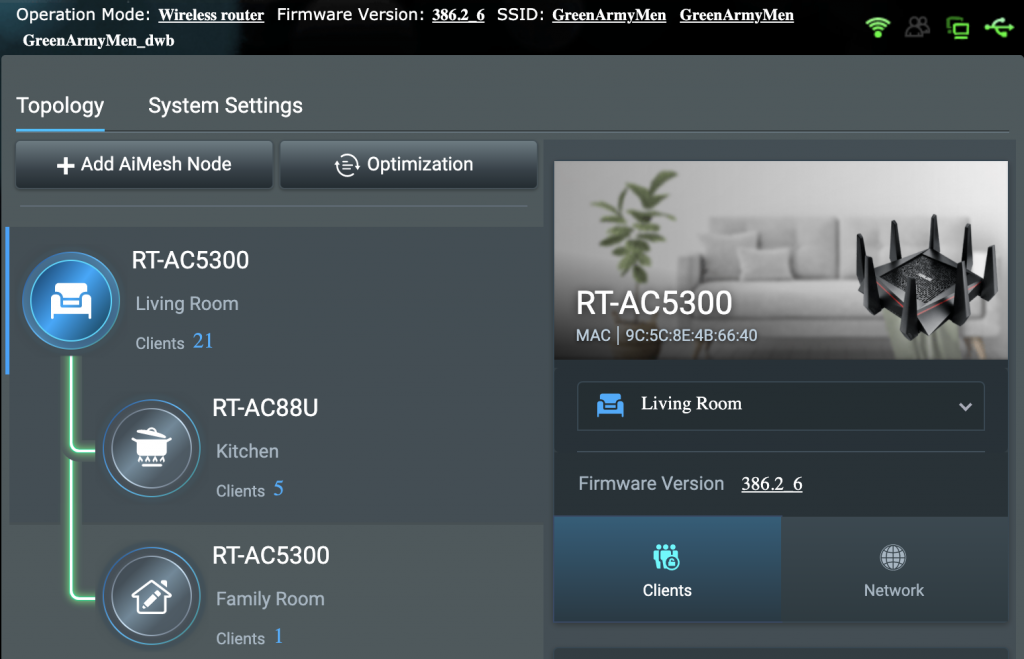 Here are the two networks being offered by the dual band RT-AC88U - and neither is a _dwb.

How do I make all the AiMesh nodes broadcast the _dwb?

However, this does not explain the details provided in the UI i.e. the dual band does not broadcast the dedicated wireless backhaul, so it can't effectively provide it to something downstream hence why all my routers are connecting to the main node, and not offering a daisy chain. (Is that possible?)

I currently assume the dual band AiMesh node, in the center of the house, does not pass or share or utilize the dwb (dedicated wireless backhaul) to properly connect the two tri-band nodes at the extremes of the house.

I did manually alter the dwb to 20mhz, versus 80mhz, and I have seen more stable results. However, even before this change, the signal was noted as 'Great' when it in fact was not functioning as such - with frequent dropped service requiring manually reconnecting the device to the network.

Any guidance on how to ensure all three devices, especially the dual band, are serving the dwb?

Why do you have the dual-band router in the middle, anyway? Assuming you are in a daisy-chain, two hop configuration, I would think you'd be better off putting the other tri-radio router in the "middle".

That will maximize backhaul bandwidth to the midpoint, which will pass on to the next hop.
Tim Higgins
Managing Editor,SmallNetBuilder.com

I kept the dual band in the center since I was not aware of this limitation initially. The UI did not disclose this in anyway.

Also, the form factor of the RT-AC88U lends itself well to the location, versus the large footprint of the RT-AC5300.

I'll try switching them up.

I will try everything at 20mhz for the 5GHz dwb, and if all is well, then bump up to 80mhz.

Staff member
There is no benefit in limiting the backhaul channel width to 20 MHz. In fact, that's a downside since you are limiting bandwidth to the rest of the mesh nodes.
Leave it at 80 MHz.
Tim Higgins
Managing Editor,SmallNetBuilder.com

I had to spend several hours of fiddling to get them all connected. And it works, as expected. But it feels brittle.

At one point this was happening...??? 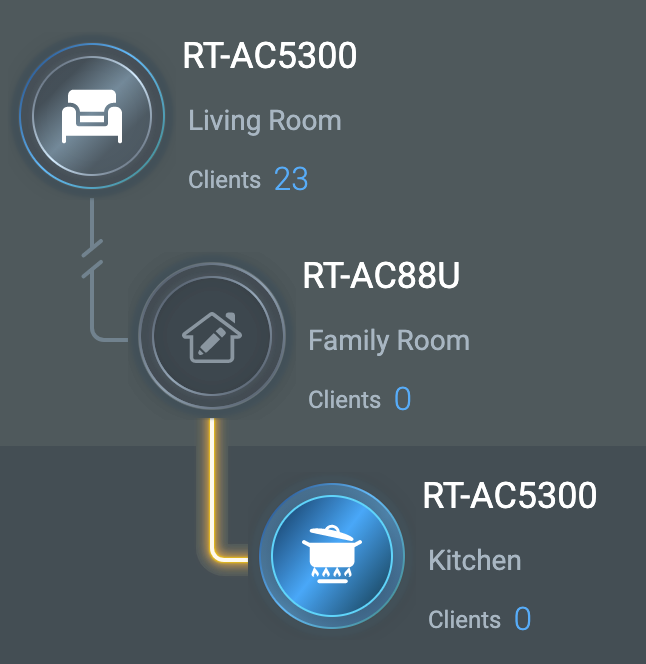 Setting the tri-band at the start, and center, with the dual band at the end, has not changed much for the end user experience.

1) It did formalize the daisy chain connection that more accurate represents the physical topology.
2) It did provide a -39db signal for the most extreme node, versus a -48db, as it now connects via the daisy chain. 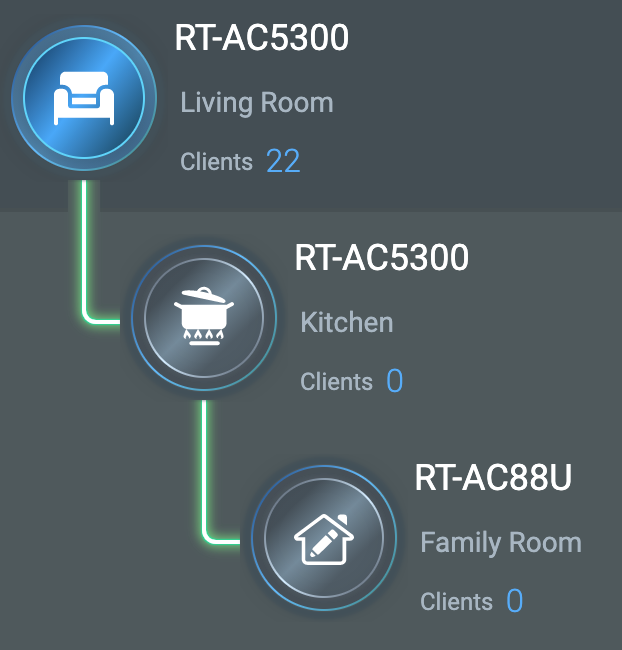 1) The dwb is not always broadcasting. This is confirmed by running inSSIDer. I had to reboot the devices several times to get that consistently on channel 161.
2) The LED lights on the AiMesh Nodes turn on a few minutes after you turn them off. This is not an issue on the primary AiMesh router.

These are signals of deeper issues.

The nodes are all within 30 feet of each other, in a clean and direct line with almost direct and unobstructed line of sight.

It should not be this complicated.

I'm seriously thinking about dumping the Asus platform after 11 years of working with it. Cisco Meraki is such a pleasure versus this. And it has real support.

For the amount of hours and days I've spent fiddling with Asus, probably several weeks of time over the 11 years, I could have bought myself Cisco Meraki more than several times over.

I'll update this further if I have any constructive results, but in summary, the dwb has some issues and the UI is missing some clear opportunities to highlight gaps in a mixed dual band, tri-band setup that are ignored due to the simplistic presentation.

No. Narrower bandwidth improves signal to noise ratio a bit, but that does not increase range.
Tim Higgins
Managing Editor,SmallNetBuilder.com

Staff member
30 foot distance with clear line of sight is way too close for a daisy chain configuration, especially given four stream backhaul. Backhaul connections could be flapping around

I don't know how "smart" AiMesh is about forming a true mesh. I don't test mesh systems that way.

There is a big difference between multiple AP systems connected via Ethernet and consumer "mesh" systems. If you connected the ASUS nodes via Ethernet, you would have a more stable configuration. You'd still have too many nodes for the space you are covering however, IMO.

Why three nodes anyway?
Tim Higgins
Managing Editor,SmallNetBuilder.com
You must log in or register to reply here.
Similar threads