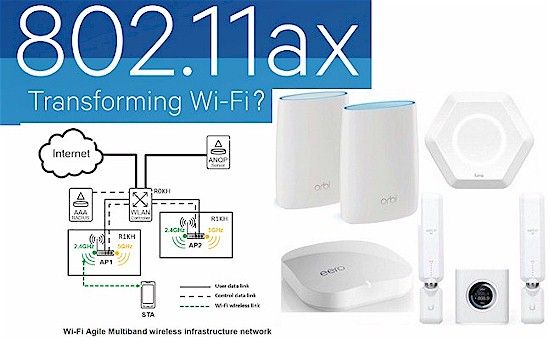 Had a great conversation on one of my recent flights between San Diego and San Jose (based in SAN, I'm up in the Valley these days 2 or three times a month on various projects).

11ax is hard stuff - and my seat mate is working on it directly - helps that I'm a recovering IEEE 802.16e/16m contributor, along with participation in some of the early 11ac/ad stuff during plenary sessions. There's a fair amount of 16m proposals that eventually made their way in a modified form into 11ax.

One of the reasons why the 11ax development is taking a very long time is interoperability concerns - 11ax is one of the largest changes to the 802.11 spec, and everyone wants to make sure it works - not just within a single vendor implementation, but across the board with all vendors. The AX working group leadership is a bit more open than the AC and AD chairs were, so that is causing things to take more time... Nobody in the industry wants a replay of the ugly 11n days with pre-Draft implementations that could not work across vendors. Yes, there's been some ugly things during early 11ax, but not to the level of what happened with 802.20 back in the day.
--
"How many lights?"
You must log in or register to reply here.
Share:
Email Link