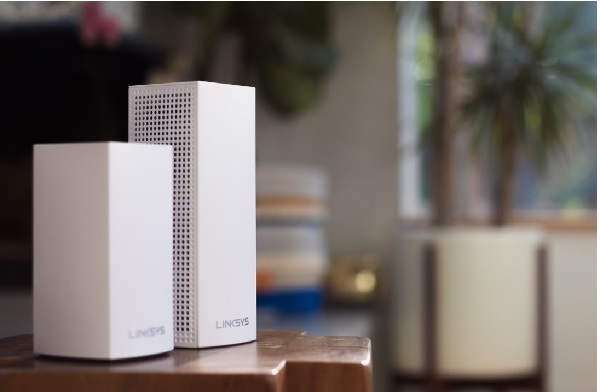 The dual-band Velop system is set up with one of the nodes designated as a parent node while all other (wired or wirelessly) connected nodes are clients. Nodes between the dual and tri-band models are also compatible to one another and can be used to extend a tri-band network at a better price.

Setting up either Velop system is done using the Linksys App, which according to Linksys simplifies the installation process. Additionally, Linksys’ Spot Finder feature helps optimize performance by helping determine the best node placement around the home.

Linksys’ Velop Dual-Band Whole Home Mesh WiFi System is currently offered as an online pre-order via Linksys.com, Amazon and BestBuy.com, and will be widely available in other online stores, as well as retail stores, on May 15, 2018. Pricing for the 1-pack, 2-pack and 3-pack are $129, $199, and $299, respectively.
S

Is there a review for this system in the pipeline? Mother Nature forced my hand on a WiFi upgrade with a timely lightning strike to my Aiport Extreme. Yesterday, I purchased the Velop Dual-Band setup. Performance has been meh. Range is worse than the surviving Airport Express according to WiFi Explorer.

Seventh said:
Is there a review for this system in the pipeline? Mother Nature forced my hand on a WiFi upgrade with a timely lightning strike to my Aiport Extreme. Yesterday, I purchased the Velop Dual-Band setup. Performance has been meh. Range is worse than the surviving Airport Express according to WiFi Explorer.
Click to expand...

That’s great news. Not long ago I wired my house with Ethernet drops in most rooms, so the wireless backhaul capacity is off little concern to me. I went with the Velop after reading your favorable review and for the wired backhaul capability. I am very much looking forward to your review. Thanks for the hard work.

Staff member
I will not be testing it with Ethernet backhaul. Our standard process uses wireless backhaul.
Tim Higgins
Managing Editor,SmallNetBuilder.com
S

Yeah I gotcha, I'm just saying in regards to your "mesh performance won't be great" that the system might still work for me with a wired backhaul. Anyhow, I'm looking forward to your review. Your reviews are well put together and the source I trust.

Staff member
Testing is done and results are in the Charts and Ranker. But review won't be up until next week.
Here is the Ranker performance summary, in the meantime.... 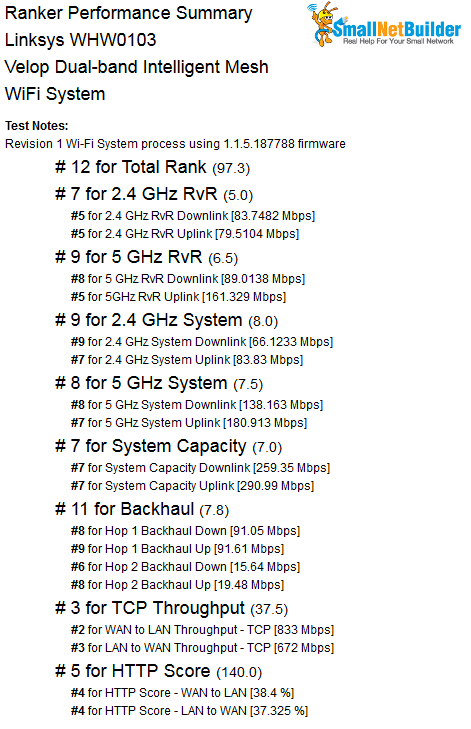 Holy smokes what a step backwards. I expected some performance loss from the tri band Velop but not this much.

I hate this Wi-Fi system infancy stage. With Netgear's firmware issues, Linksys' high price and now poor performance, it doesn't seem like anyone will offer a complete solution anytime soon.

Thanks a lot for the sneak peek.

Staff member
The APs aren't really that bad if you use Ethernet backhaul. The weakness is Wi-Fi back haul.
Tim Higgins
Managing Editor,SmallNetBuilder.com