Staff member
QNAP has announced the release of its TVS-x82T next-generation Thunderbolt 2 NAS series.
The three models (12, 8 and 4 bays) are all designed for very high storage performance and access bandwidth with Intel multi-core processors and 10GbE and Thunderbolt 2 connections.

Connectivity options for the TVS-1282T include two Thunderbolt 2, two 10GbE and four Gigabit Ethernet ports. Other ports include five USB 3.0, two HDMI 1.4b, one HDMI 2.0 and analog audio in and output. 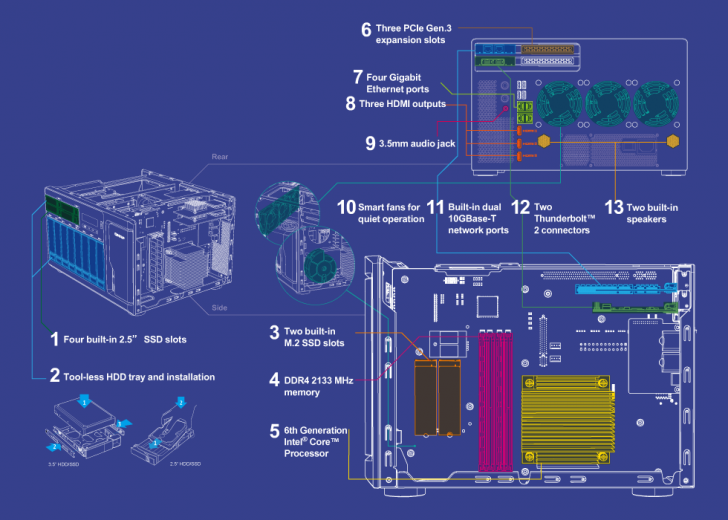 All models can be expanded to a total of 32 GB of RAM and more storage via five or eight-bay Thunderbolt 2 connected storage enclosures.

The TVS-X82T series will be available soon in the U.S. Pricing was not provided.
Tim Higgins
Managing Editor,SmallNetBuilder.com

I need to read up more on these - with the Thunderbolt connectivity it makes things very interesting - wonder if thunderbolt is direct attached storage, or iSCSI over a thunderbolt network connection...

They've been doing some very nice product lately across the entire range - and QTS 4.2.1 brought in quite a bit of features, more than one would consider as a "point release".
--
"How many lights?"
You must log in or register to reply here.
Share:
Email Link