I currently have a home network that's managed by 2 Asus AX86U routers in mesh on Merlin firmware.
My home has CAT6 cabling, and the 2 routers are hardwired via their 2.5Gbe port.
I am planning to get a 10Gbe switch so that I can have a quick internal network (file transfer between my hardwired computers and my NAS that currently has a 2.5Gbe port but will be soon upgraded to 10Gbe).

How many ports you need factors into this as well. If you're just running them to a NAS or PC as a NAS you can just add some dual 10GE NICs for less than a switch in most cases.

It all depends on how you have things setup and the objective for speed. The basic devices don't really need more than 1GE ports if they're even wired as they don't need more than 100mbps typically to stream media and such. The benefit comes to the high data devices PC / Laptop / etc.

Another thing that might be useful is a USB 5GE adapter on the Asus to boost throughput on each of them for $70/ea you can get -
https://www.amazon.com/gp/product/B08977K9D2/?tag=snbforums-20

Those will give you a backbone connection between the routers at 5GE relatively cheap compared to buying new devices that hit 5/10GE.
A

Thank you so much @Tech Junky . The only thing I don't understand is how to connect the 5GE USB adapter to the router. Will it reach 5GB speeds through its USB?
Either way, here is a diagram of my wired network. Please keep in mind that the ISP's router/modem is not broadcasting Wi-Fi, my AX86U are in mesh, and I have not displayed all the Wi-Fi devices that are connected to the network, but there are a quite a few.

Since the modem / hub has a 10GE port as well this is where things get tricky / potentially expensive,

I would push to move the routing / DHCP to the hub with a SFF PC as a router with a dual port 10GE NIC - $450 all in w/ Linux running the network for the best performance. I run this setup after being disappointed by off the shelf options and inflated costs for gear that go beyond 1GE speeds. I run a quad port 5GE NIC since my disks cap out currently at 400MB/s+. I rolled a bunch of functions into a single box to consolidate things and increase the performance. Of course only wired devices get that kind of speed but, over WIFI I still can get 1.5gbps using a WIFI 6 AP + AX411 NIC in the laptop. Since TB NIC's at 10GE are ~$300 I went with the Sabrent I mentioned above for the 5GE at 1/5 of the cost.

I would take the SFF PC and connect one port to the hub and the other to the proposed switch. This gives you a max of 10GE through the WAN/LAN. Then the other issue would be the switch and/or if you wanted to upgrade the speed of the NAS or roll it into the SFF PC with a case upgrade that can house the drives. Rolling the drives into the PC would eliminate the need for the 3rd port at 10GE and would mean only needing to add a 2nd 10GE NIC for $200. This brings things to ~$650.

Well slightly more for a case upgrade for the drives unless it's only a 2-bay NAS you're currently running in which case a SFF PC option might exist with 2-bays inside it. I run 5 drives in a Raid 10 setup - 4 required with 1 hot spare in the array.

I used the Node 804 for a prior build and it had 8 drive slots in the hangers plus room to mount some more in alternate spaces. The 304 would be perfect for a router / NAS setup w/ 2 slots in the back for the 2 x NIC's to provide that 10GE speed you're aiming for. Looks like they're going for $100 which is fairly cheap Then you just sell the NAS enclosure to make up the difference of the case price and NIC's to a degree.

The other option would be upgrading the NIC in the NAS. Some offer the ability while others have it mounted to the board itself.

There are a decent amount of options for 10Gbe NbaseT switches since the past few years (ie support for 2.5,5/10 GBPs) from various vendors like NETGEAR, Zyxel QNAP etc, prices are still relatively high though, so see if you really need it.

Those options were prior to info that was given in post 3. There's plenty of ways to do this though, Sure, adding a 2.5GE dumb switch for $100 adds 8 ports but, there's only 3 devices in concern for needing the higher bandwidth. Maybe dangling the 2.5 switch off one of the 10GE NIC ports would be good for the Asus boxes for AP use post conversion to the SFF PC option. Or, upgrading the Asus to 5GE backhaul between them could be an option too with a Sabrent adapter on each,

The problem is there's so many different ways to do this sort of thing and it all changes based on priority / budget.

If it were me I would focus on the wired devices, get rid of the Asus boxes, put in a decent AP w/ 2.5GE backhaul and put everything else on wifi. It's not either of our networks or house though and there might be some limitations on what can be done within the space. Being wired for Cat6 though makes things easier for extending connectivity and leaves a ton of options depending on the budget and skill level.

So, while your 8-10 port 10GE switch makes sense for your application 2-3 devices doesn't mean there's a need for that many ports at this point. Now, if @AndrewJacob decided to add more devices than the 3 ports my SFF option provides adding a small switch for more port density would allow for expansion,

The Key is getting a good foundation in place and having the option to expand later w/o much effort or costs.

Hmmm thanks all! A lot of food for thought here. My main concern is that I went with 2 AX86U routers and quite like their form factor etc. so I want to avoid changing everything...

If I keep the routers
I'm wondering if I should connect the main router to a switch like the TP Link or the Zyxel, then connect backhaul from one of the Zyxel 10GBE to the second AX86U, but use all the other 10GBE ports with eachother, that way when moving files from my PC to the NAS, I could get 2.5GBit speeds, and when moving files between my laptop and PC i could reach 10GBit. I'm guessing that's the best I could do without completely changing one or both routers and my entire system.

If I don't keep the routers
I could change routing to a specialized raspberry pi or what not, or just change my system to something like Ubiquiti. But I'm not big on the idea of changing everything right now.
Thoughts?

Use the existing routers for WAN and Wi-Fi, add a switch for faster LAN - the least expensive option.
A

Thank you. Do you recommend a managed or dumb switch?

Tech9 said:
Your AiMesh won't work through managed switch in default configuration. Do you need managed switch?
Click to expand...

To clarify that: AIMesh uses VLAN-tagged packets to pass guest-network data through wired backhaul. (Maybe it does so for the main SSID as well, I'm not sure about that.) So if you insert a switch between the AIMesh nodes, it had better be capable of passing VLAN-tagged traffic. AFAIK, any modern managed switch can do that --- of course, you gotta configure it to do so. With unmanaged switches you are very much at the mercy of the switch vendor. I have Netgear switches that will pass tagged traffic, and a TRENDnet switch that will not, and that TRENDnet switch caused me a lot of trouble till I figured that out.
A

Hmm thanks! And great point @tgl . How would I go about finding unmanaged 10GBE switches that would fit the bill?

tgl said:
To clarify that: AIMesh uses VLAN-tagged packets to pass guest-network data through wired backhaul. (Maybe it does so for the main SSID as well, I'm not sure about that.) So if you insert a switch between the AIMesh nodes, it had better be capable of passing VLAN-tagged traffic. AFAIK, any modern managed switch can do that --- of course, you gotta configure it to do so. With unmanaged switches you are very much at the mercy of the switch vendor. I have Netgear switches that will pass tagged traffic, and a TRENDnet switch that will not, and that TRENDnet switch caused me a lot of trouble till I figured that out.
Click to expand...

Thanks for explaining that as I dont use AIMesh yet.. I did get rid of my cheap TPLink 1G switches as they would not really do 1Gbit even though they said they would.. Replaced with netgear GS 1G switches..old but really do 1G.
T

AndrewJacob said:
How would I go about finding unmanaged 10GBE switches that would fit the bill?
Click to expand...

Sadly, this point doesn't seem to get mentioned in spec sheets too often. Best I can suggest is to buy from somewhere that'll let you return the switch if it doesn't do what you need.
A

Thanks TGL. I'm wondering if I should take the dive and go with a UDM pro SE. Connect the Sagemcom directly to the 10G SFP+ wan port, then connect the 10G SFP+ lan port to a ubiquiti 8 port layer 2 switch (USW-Aggregation) for my NAS and wired 10Gbe network, and get 2x acces points U6 Pro access points (specs below). I wonder if that would be a better option than upgrading my current system with one of the switches that may or may not work with ai mesh... 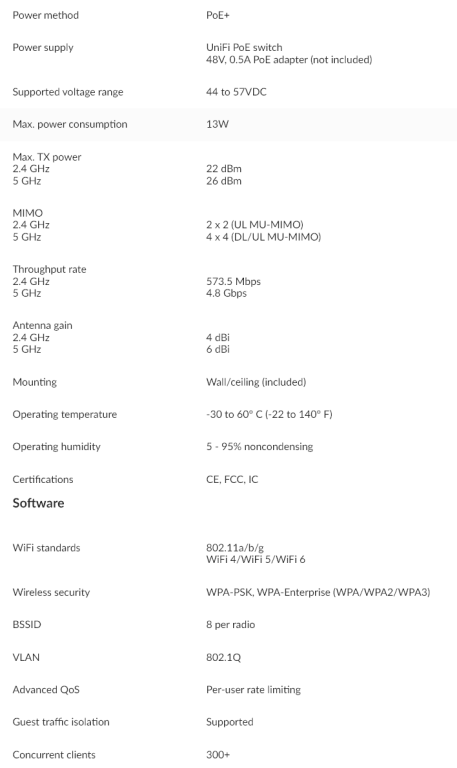