Hi!
I am currently running RT-AC68U + RT-AC57U V3 in AiMesh.
Based on https://www.asuswrt-merlin.net/ Asuswrt-Merlin will work only on RT-AC68U. There is no RT-AC57U V3 support.
Should I upgrade the AC57U V3 router to a different one with Asuswrt-Merlin support OR I can use still it as a node with original ASUS firmware and Merlin on AC68U?
(Wired connection between both, node used as a network extension, same wifi name etc.)

What version firmware is the RT-AC57U running?

No, a full reset to factory defaults is required for the most stable and reliable experience.

I did not understand your answer.
So if I will reset and put Merlin firmware on RT-AC68U and make it act as a main router and keep original firmware on RT-AC57U V3, reset it and connect it as AiMesh. Will it work? Will I be able to access all the features of Merlin? Or do I need to buy another supported router to also have it run Merlin and only then connect is as a node?
Last edited: Feb 22, 2021

Sorry, I couldn't reply as fully as I should have earlier. I hope the following is clearer.

After flashing RMerlin firmware to a router with stock firmware, a full reset is highly suggested (I would state 'required').

Flash the firmware you want to use on them first, then, remove all Ethernet cables, USB devices, and the AC power plug from the router and the wall plug, and then use the appropriate method in the link below to perform the WPS Button reset method for your routers (both).

Make sure to do the same steps above for your AiMesh node (and then after resetting it, leave it untouched and waiting for the following to be completed, below).

After doing the above, follow the suggestions below to get your main router secure, connected to your ISP, and at a good/known state (with the defaults suggested).


With the router and the network working as expected, use the appropriate section of the same link above to connect the AiMesh node to the network.


Use the link below to configure a USB drive for use with amtm on the main (RMerlin powered) router. Do not 'install' amtm as the (old) guide suggests. Since RMerlin firmware 384.15_0 amtm has been included 'built-in' to the firmware (simply type amtm to start it at an ssh command prompt as described in the guide below).

1. I did an Asuswrt-Merlin installation on main router AC68U
2. After installation node was still active, could see it on the network
3. Did a factory reset for main router
4. Did a software update on node
5. Did a factory reset to node
6. Since that I'm unable to connect it. I tried trough wired connection (same setup, it did work before), I tried via wireless connection. Tried to connect it straight after factory reset on node, and also after logging in to node and setting it up as a node in administration menu. Also tried to get back to original firmware on main router and set up from there. Anyhow, best I get is ~17% or sometimes 60-70% installation process and then this error appears. 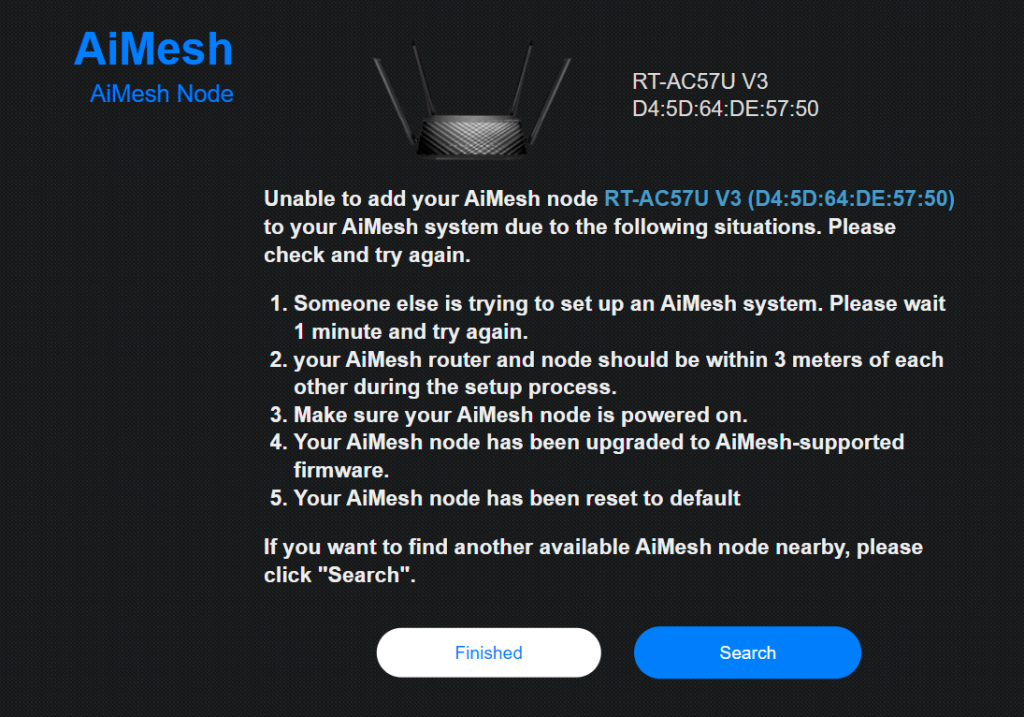 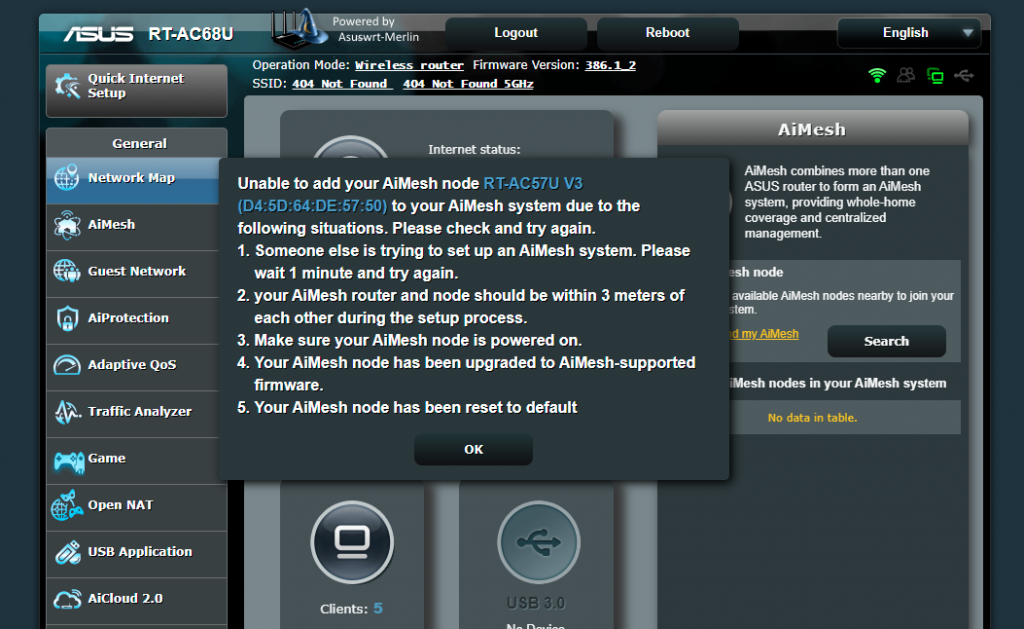 WPS is on, on both devices 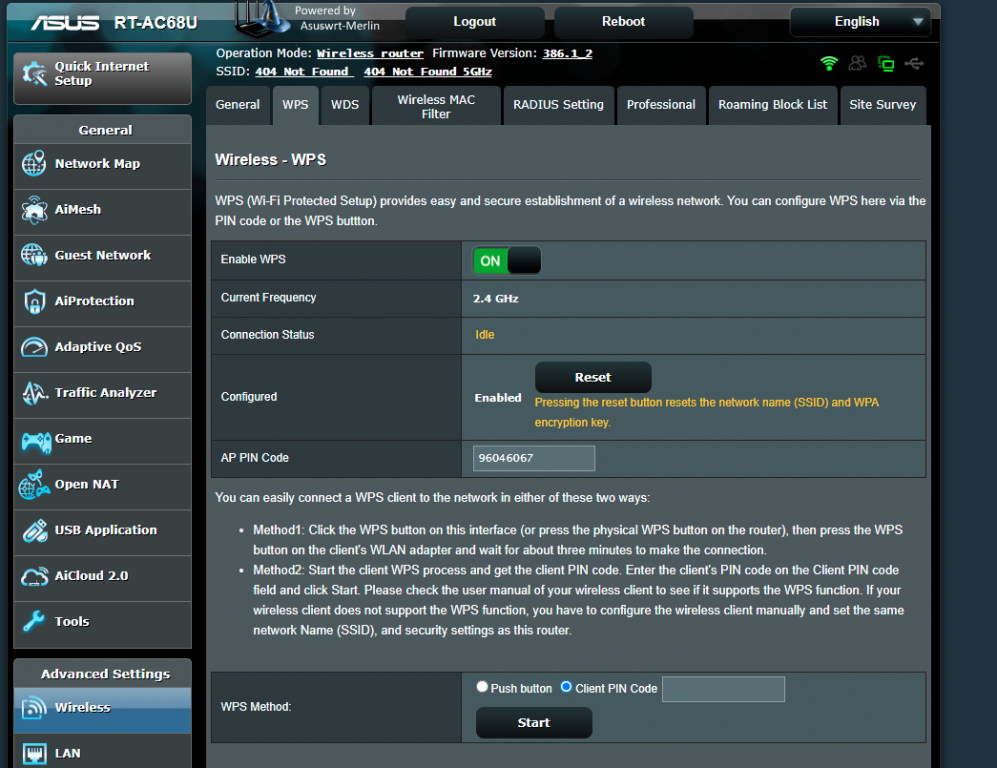 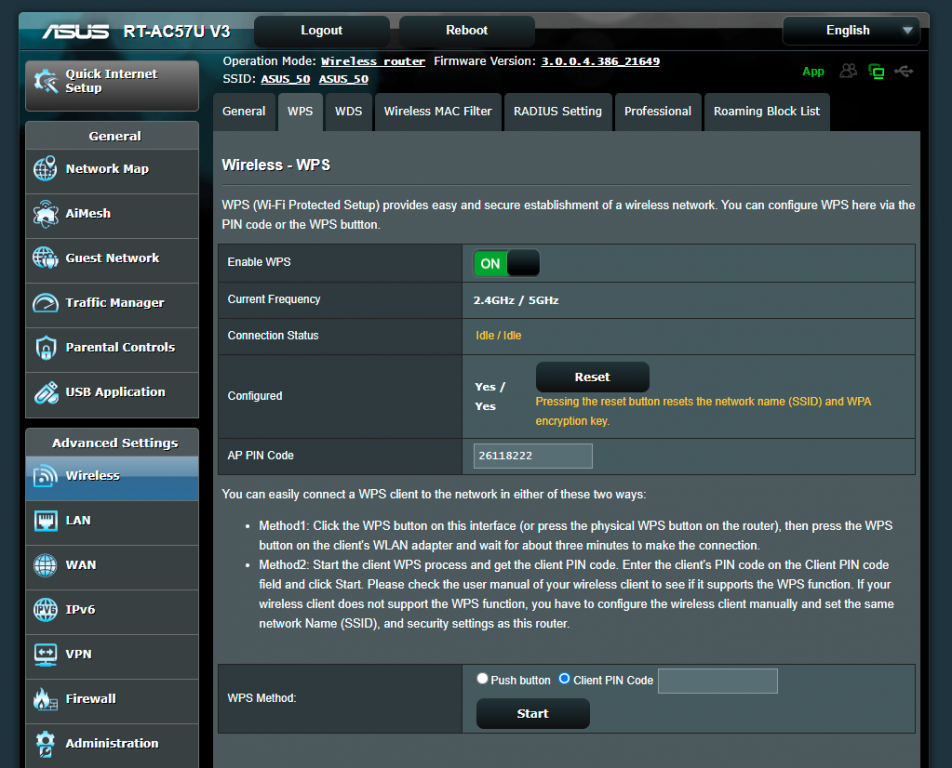 ?
I do understand how to manage the nodes when they are connected. I have a problem connecting one.

Epi said:
?
I do understand how to manage the nodes when they are connected. I have a problem connecting one.
Click to expand...

octopus said:
I dont think so, you show you turn on WPS on node. Not necessary if you doing it right. First WPS reset and after press reset pin on back. Then put it in AiMesh nod and search.
Click to expand...

Also,
When RT-AC57U is just set up as a node in "Administration", I'm able to find it and start aimesh process on main router, during which it crashes. After that, node cannot be found any more and I need to reset node router again for another attempt. Don't know is it relevant or not.

Still looking for help with this as half of my house is without internet connection.

Epi said:
When RT-AC57U is just set up as a node in "Administratint or not.
Click to expand...

Try with aimesh node, don't try from Admin Page. Use first WPS factory reset and when that come up again reset with "reset pin"
on back of aimesh router and follow instructions to setup aimesh.

1. Did a reset on node router trough the button on the back side
2. Logged into node and did a factory reset trough gui
3. Rechecked that main router has WPS on
4. Logged in to node router and followed instructions to set it up as aimesh
5. After node aimesh setup is complete, it asked to connect to main router to finish the process
6. No node SSID broadcast starting from this point, also don't see node on the network trough main router, despite router being online and based on lights on it, working both in 2.4GHz and 5GHz
7. Connect to main router, started a search, node not found, removed the wired connection between routers
8. Restarted the search, nothing found again
9. After some 10 minutes node started to broadcast SSID again, connected to it (it did a factory reset, as requested password to be set up again)
10. In node admin chose AiMesh Node operation again, applied settings 0-100%, as requested connected to main router, saw node 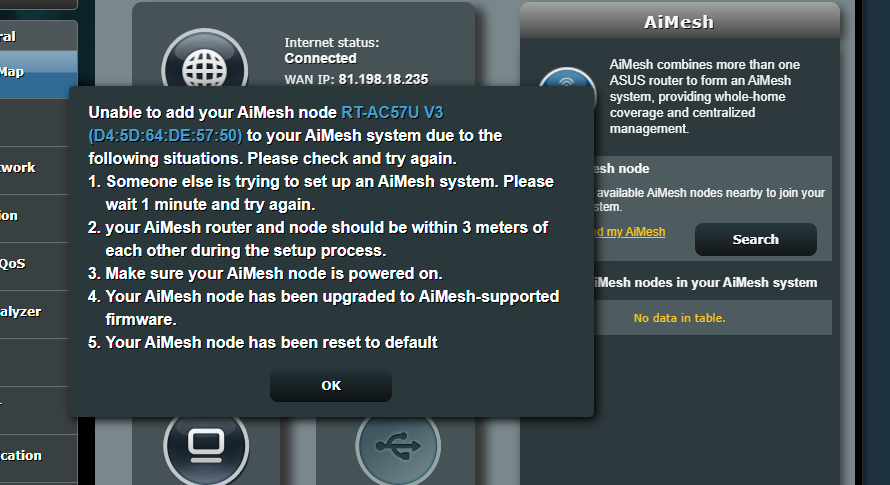 I don't think I'm doing something wrong. There must be some kind of firmware issue or incapability. Maybe I should try different firmware version on both or any specific router? Can someone confirm which stable version works well?
E 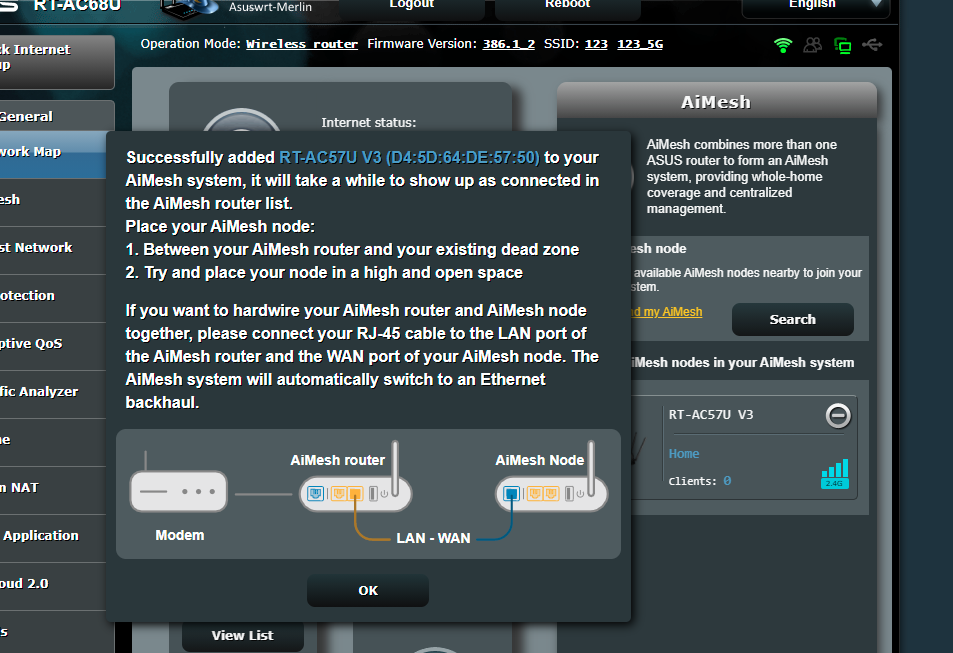