I need to establish faster than 1G connection between a PC with 2.5G port and NAS capable of link aggregation. Can someone please verify or reject the following configuration: PC to RT-AX86U through 2.5G ports, and RT-AX86U to NAS through two link-aggregated ports (which on the router)?
Thank you for the help guys.

it`s working, but, the maximum speed between PC and NAS, for each task (separately), will be a maximum of 1GB.
ASUS RT-AX88U

LAGG is beneficial mostly for two or more client devices accessing the same device (more than one PC to a LAGG connected NAS). It may also be useful as a 'failsafe' connection with the second Ethernet cable too.

Thank you for saving me 300CAD guys !

I have a NAS that has 2.5GBE ports that support link aggregation. I won't use link aggregation but with how cheap 2.5GBE switches are and how much faster you can access your content, I think it could be worth looking into that if your aggregation ports are 2.5GBE?
M

I was wondering about the similar question.

But this is my exact situation - maybe you can clear my mind of the issue...

Question is - did anyone test if it is possible to have up to 2Gbps speeds in wired transfer this way to and from the NAS?

L&LD said:
LAGG is beneficial mostly for two or more client devices accessing the same device (more than one PC to a LAGG connected NAS). It may also be useful as a 'failsafe' connection with the second Ethernet cable too.

Unless your NAS is also 2.5GbE enabled and you're willing to buy a switch that supports the higher connection rates, you will not achieve a faster connection to a single device as it is described right now.
Click to expand...

as others have already pointed out single client speeds will not increase using LAG on a NAS (it will of course help multiple clients).

If your NAS doesn't support an upgrade path to a multigig NIC (either USB or PCIe) then the better option is enabling smb3 multi-channel in SAMBA on the NAS - that will spread the load _per_client_ across multiple interfaces. Even better it requires no support on the switch - the ports on the NAS as still 'separate' each with their own IP (all the 'smarts' is done in software)

The only issue is that NAS vendors aren't using a recent enough release of samba to support multiuchannel - samba 4.13 was the first release to class smb3-mc as 'stable' (up to then it was experimental), and I know current DSM and ADM are languishing way back on samba 4.4 (don't know about the beta of DSM7 nor Qnap's new QuTS). Hopefully things are a lot more current on opensource systems like TrueNAS

You can still hack current samba onto your NAS if it supports something like entware - but obviously that requires decent unix/shell knowledge and isn't for the faint hearted (I've got a 2-bay asustor with dual 2.5gbe ports here, running current samba via entware and talking to a 10gbe card in my desktop - can hit low/mid 300s on sustained read/writes, which is the limit of the raid0 array)
L

but with my asus i can see if they work

i try with port (1 and 2) from the information in Asus merlin screen, and with (3 and 4) i Try This from the Link https://github.com/RMerl/asuswrt-merlin.ng/wiki/Link-Aggregation 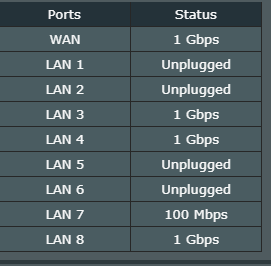 Thank you everyone
You must log in or register to reply here.
Similar threads