RT-AX88U 5GHz light disabled. Radio is operational, some router panels show it's not...

Had this issue off/on since 384.13 in that after a firmware update or power off/on the 5GHz light on the router doesn't turn on. Now off solidly with 384.16 latest alpha1 (gfcd95af015) after a power off/on (was on initaly after first Alpha load). But the 5GHz radio is working for clients?! Router panel pics attached showing radio on & off!. I've tried these to resolve...
a). Smart Connect in On & Off modes.
b). Used different SSIDs for 5GHz (that worked once, until next power off).
c). Reloaded Merlin firmware again, in a dirty reload.
d). Power off/on router and also reboots from GUI.
e). Used SCMerlin to reset WiFi
...any ideas, other then a nuclear reset? 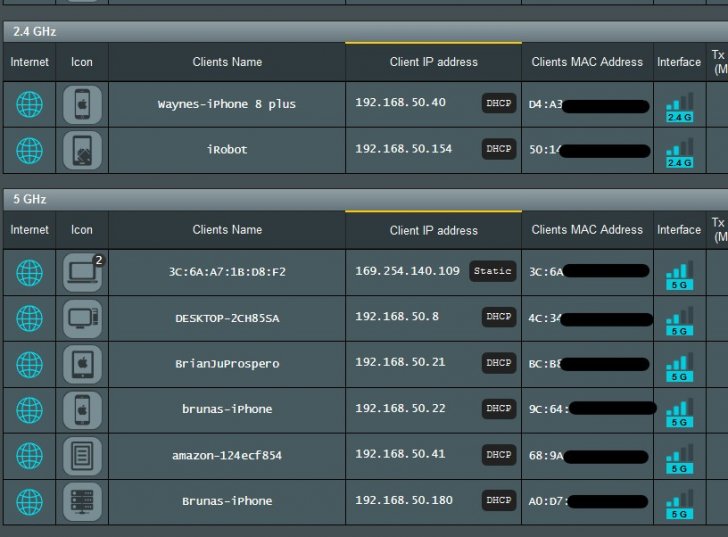 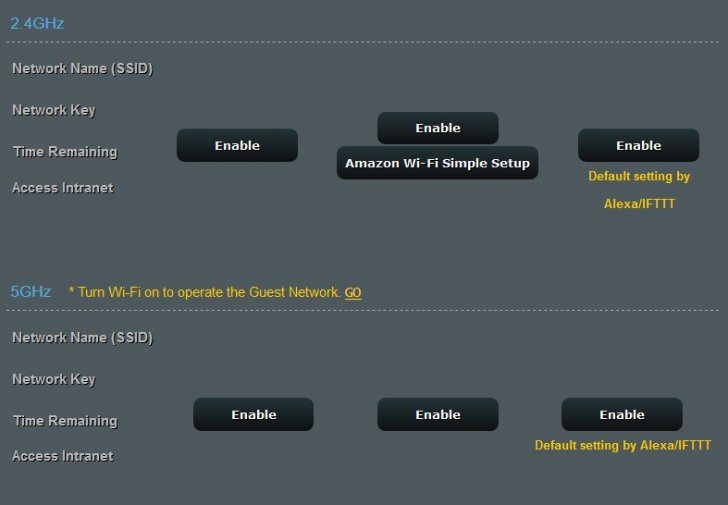 Try a more thorough electrical reset. Pull off the power while the switch is still On, to drain any residual charge, wait 5 seconds, then plug it back in.
Asuswrt-Merlin: Customized firmware for Asus routers
Github: github.com/RMerl - Twitter: RMerlinDev - Freenode: #asuswrt
See the sticky post for more info.

RMerlin said:
Try a more thorough electrical reset. Pull off the power while the switch is still On, to drain any residual charge, wait 5 seconds, then plug it back in.
Click to expand...

Thanks for the tip. I had been performing pull power plug, waiting 10sec, then back on, and no luck. This time, pulled the power plug, the USB drive, the RJ45 ethernet cables. After 10mins, then powered on the router by re-installing the power plug. The 5GHz case light now came on (yippee...) and the GUI panels all reflected the 5GHz was operational. Then plugged in the USB drive and RJ45 Ethernet cables. All scripts and functions came up ok.
Performed a GUI reboot after 15mins, that also came up 100% successful. Thanks again!!

After updating the RT-AX88U to 384.16_alpha2-g08edec78d0 all went well. Powered off for 20secs, then on via power plug remove and install. The 5GHz once again didn't come up correctly and its panel light wasn't enabled. Powered off again, unplugged all the RJ45 cables, the USB drive (used for the various AMTM enabled scripts). Left for a few minutes, then powered on again, and the 5GHz enabled quickly and panel light on. Plugged in the USB drive and cables and everything operational. After 15mins, did a reboot, and all ok.
Something about the USB drive and plugged RJ45 cables "appears" to stop the 5GHz radio turning on correctly?...doesn't make a lot of technical sense to me though. Will play later on removing cable(s) one by one and USB drive, then power off/on to see what occurs.

Some further playing around on this with 384.16 beta3. If I leave the USB drive in and firmware update, the 5GHz light doesn't turn on and other indicators as early posts the 5GHz didn't enable correctly. If I pull the USB drive out, then firmware update, all works ok. Then I hot plug the USB after 10mins everything enabled shortly afterwards (Diversion, Skynet, Unbound etc.).

Hello, I am running 384.18 on my RT-AC66U_B1 and I noticed that the 5G radio randomly turns off. I dont have any USB connected or anything special. The 5G connection was working one minute, now its off. I tried going to the CLI and running the 'radio toggle' command, but it only seems to toggle 2.4G and 5G stays 'disabled'. Do you have any idea why this might be?
You must log in or register to reply here.
Similar threads