I've been planning to set up an aimesh system at home to better my internet coverage, so I did some research and decided to purchase the RT-AC86U as the aimesh node.
Since I have a DSL-AC68U which has a modem integrated, I'm assuming that is the reason why I cannot use the DSL-AC68U as a node and it must be the main router.

I connected the RT-AC86U to my laptop to upload the latest merlin firmware (RT-AC86U_386.3_2_cferom_ubi.w) and in the administration tab, I selected it to be an aimesh node, which forwarded me to the automatic setup where it reboots the RT-AC86U and set it up as an aimesh.

Once rebooted, I reconnected my laptop to the AC68U to add the RT-AC86U as a aimesh node. It runs and loads up to 100%, but after, the end results indicate the following: 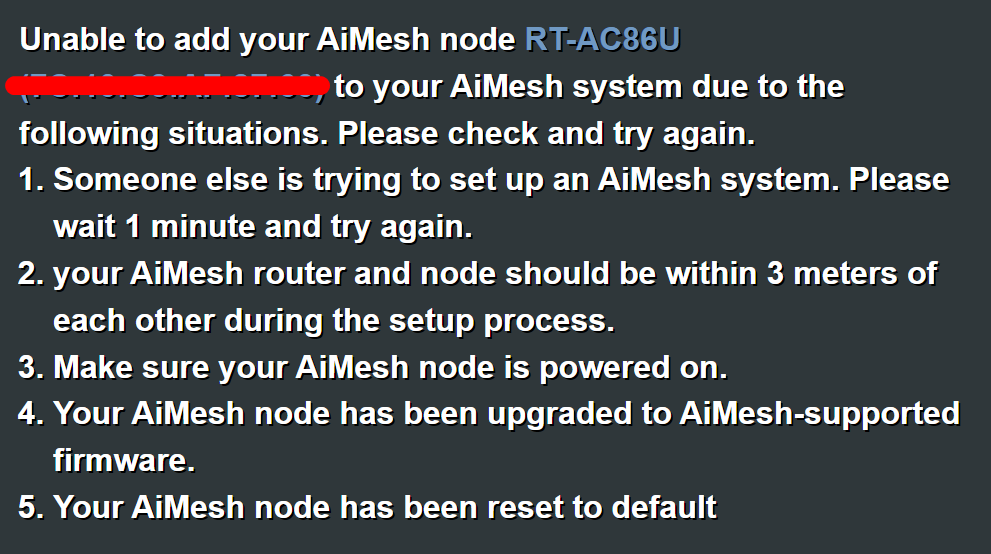 1. No one else is trying to set up an AiMesh system and I have waited 1 minute and tried again, but was still getting the same result.
2. The node router is next to the main router.
3. node router is powered on.
4. Aimesh node has been upgraded to RT-AC86U_386.3_2.
5. AiMesh node should have automatically reset to default through the automatic step.

Have I setup the aimesh system incorrectly?

I did contact asus support, and they were very friendly. We went through steps of rebooting the RT-AC86U router, but it still didn't work. He suspects that it may be the merlin firmware?
Last edited: Jan 6, 2022

Yes, you're doing it wrong. Do not use the GUI of the node you want to add to your AiMesh network.

I would also suggest you upgrade to the latest RMerlin release too, 386.4_0.


Perform a full reset as indicated for your model in the link below. Then, do not touch the RT-AC86U at all.


Now, go to the main router and add the AiMesh node from there. You may find that using an ethernet cable from the LAN of the main router to the WAN of the node may help if it doesn't work wirelessly in the same room (once it has been successfully added, simply remove the cable, power down the node, and boot it up in the location you require).

The following link may also be useful.


You may also want to check that you have the latest @GNUton version of the firmware on your main router too.

Hi,
Last evening I tested the DSL-AC68U with my latest beta3 and AiMesh works great there as long as you pair the nodes with the cable.

If it cannot link to the node:
A. check that LAN of the master is connected to WAN of the slave
B. Reset to factory the slave and do not configure it before pairing

You can disconnect the eth cable after the setup.
Last edited: Jan 6, 2022
L

Thanks to @bbunge for replying first, I had gone through the steps of keeping the RT-AC86U in the Asus stock firmware, but keeping the main router in the merlin firmware (I didn't want to lose using this firmware, as I have had no problem - thanks @GNUton). I connected the two with an ethernet cable, from the node WAN port to main router LAN port. This worked on the second try and has boosted my wifi strength x2 at areas that had a weak signal, in comparison to a wifi extender.

@L&LD , I did try to download the 386.4 firmware, but nothing happened. But will try again, as I did not read how to install it. I'm assuming I'll need to reset it to upload the new firmware.

No, you shouldn't need to reset it simply to flash to the new firmware. But, seeing that you may be flipping back and forth between firmware, it may be a good idea to do a full reset after the new firmware is installed.

Hey @L&LD ,
Oh ok. I did upgrade the node firmware to merlin, and it is still running fine.

GNUton said:
Hi,
Last evening I tested the DSL-AC68U with my latest beta3 and AiMesh works great there as long as you pair the nodes with the cable.

If it cannot link to the node:
A. check that LAN of the master is connected to WAN of the slave
B. Reset to factory the slave and do not configure it before pairing

You can disconnect the eth cable after the setup.
Click to expand...

Is this during the pairing process only? I will have an AC5300 left over when I upgrade to the RT-AX86U and was thinking for using it as a node. Putting them in the same room for pairing is easy, but to permanently connect via LAN cable I would have to do it via MoCA. Not sure this is any gain by doing that.

@Pegasus9 eth backhaul is required only during the setup.When you move the routers far apart
you will see they connnect but the link can be bad if too far.. but that's not a firmware or AiMesh issue and nothing I can do for that.

GNUton said:
@Pegasus9 eth backhaul is required only during the setup.When you move the routers far apart
you will see they connnect but the link can be bad if too far.. but that's not a firmware or AiMesh issue and nothing I can do for that.
Click to expand...

Thanks for the info. I will give it a whirl and see what happens. I have fairly good connectivity throughout, but a little extra umph couldn't hurt. The node will be two floors under the main. I will post what happens in case anyone else is considering the same.
P

I would like to set up the above but in reverse - I have an RT AC86U as my main router and I have a couple of spare DSL AC68U routers. I would love to have this set up using wired backhaul but I cannot figure out how to do this? Is it possible to assign one of the LAN ports on the 68U as the WAN for AiMesh backhaul? If so where and how would you do this?

Paul
You must log in or register to reply here.
Similar threads