When doing backup to a portable HDD connected to router USB3 using ToDo backup, my maximum transfer speed over Ethernet with RJ-45 Cat 6 20 meter cable on 1Gb connection is maximum 420Mbs. When copying large file (10Gb) from PC (i9-9900K CPU with 64Gb memory and Samsung 1Tb M.2 NVMe 970 EVO Plus) the max speed is the same. I know I am using an old Merlin software release 380.65_2 but I don't think this should be the problem.

I tried 3 different RJ-45 Cat 6, Cat6_a and Cat7 cables. The results were the same. I also enabled the Jumbo frames on the Router and network adapter - the CPU is working less but the transfer speed is the same.
(BTW: Over 5G WiFi network 15m and 3 walls from the router the max transfer speed is 200Mbs).

Another thing is that when I doing the backup of small and very large files the transfer is not all the time about 360-420Mbs. It is 4-5 seconds at this speed, then dropping down to zero and resuming again. The speed dropouts are only happening when using the backup and it are not happening with direct copy. When I cancel the backup, the transfer speed is smooth 350-420Mbs until the backup file is deleted.
I am attaching 2 screenshot of the problems. 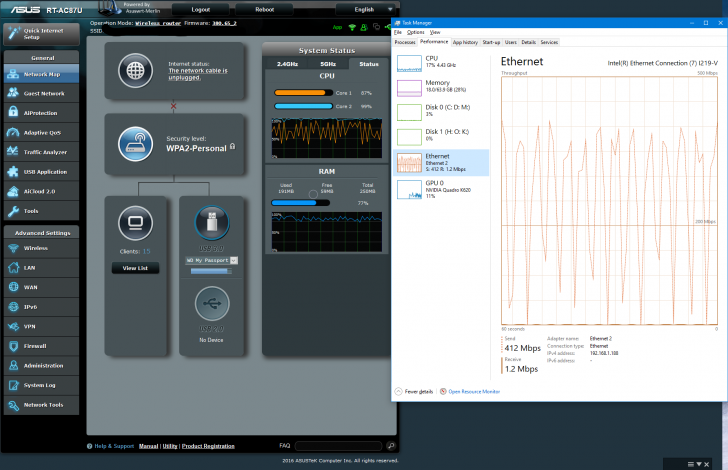 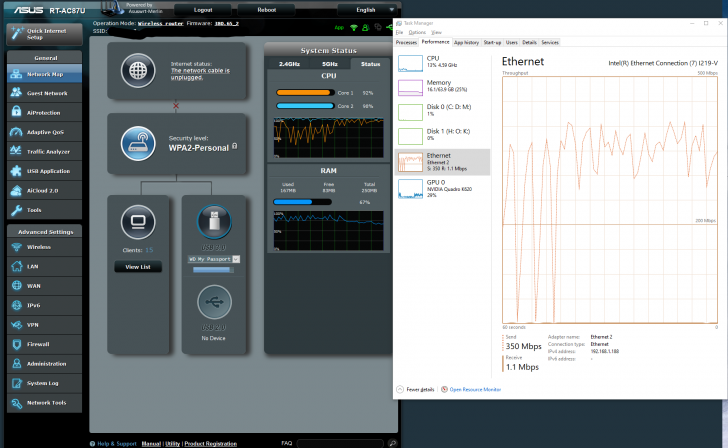 There is nothing unusual in what you're seeing. In fact your throughput is slightly higher than expected.

ColinTaylor said:
There is nothing unusual in what you're seeing. In fact your throughput is slightly higher than expected.

If you want better performance you need to use a NAS.
Click to expand...

ColinTaylor said:
There is nothing unusual in what you're seeing. In fact your throughput is slightly higher than expected.

If you want better performance you need to use a NAS.
Click to expand...

I second that. It all looks good.

Colin,
Do you know why while doing backup the throughput is dropping down to zero and resuming again?
Router RT-AC87U Merlin 380.65_2
C

fafot said:
Colin,
Do you know why while doing backup the throughput is dropping down to zero and resuming again?
Click to expand...

I've observed the same thing. I haven't particularly investigated it but it appears a combination of factors; the way the SMB protocol works, the lack of CPU and RAM on the router and the slow IO subsystem on the router (the CPU is spending most of its time waiting for IO to complete). You could try changing the native filesystem on the USB drive, e.g. from NTFS to ext4. It might help a little bit.
RT-AX86U - 386.5_2, RT-AC68U/A2 overclocked to 1.2GHz/800MHz - 374.43_49E4j9527

It doesn't. I did some experiments in the past, same thing happens all the time. Buffers are full, CPU is waiting for IO, lack of RAM, etc. The moment transfer drops to zero router's RAM is full. And the best part it affects other processes up to the point something gets terminated. Not a good idea in general to use the router with external HDDs. It's one of those 50-in-1 features that is available, but doesn't really work as expected.
Inactive user since Apr 10, 2020

The following is installed/running on the router/SSD:
(something close to the configuration most users have)

Val D., is this via wired or wireless client? What connection if via wireless (and other pertinent data points)?

Wireless of course, to torture it even more, 2x2 AC client connected at 866Mbps.
YouTube 2 x HD streams on background and a few Internet Speed tests in between.

The router was reset recently and running perfectly fine. I was installing the scripts and testing them one by one to see if they work as expected. The scripts work OK, no major issues. Found some not critical errors, acceptable. File transfer test was done after reboot and no more logs coming in System Log, except Skynet dropped packets (normal). Large file transfers literally kill the router, especially when it hit the folder with thousands of small files. RAM at 95%, CPU at 100%, large swap file usage... and things started falling apart one by one up to the point I couldn't login anymore in WebUI and even lost the OpenVPN Client (so, no Internet, Kill Switch) running on the same CPU core.

For small volume transfers it is holding, kind of, but if someone expects to get a NAS-like behavior - forget about it.
And all TrendMicro services were OFF during the test. If they were ON, poor thing would get down on it's knees much sooner.

I knew the router won't hold, the test was done mostly for fun, but I didn't expect it to produce such catastrophic results.
Inactive user since Apr 10, 2020

I wonder if the results would be similar with a 1GB RAM and 4 Core CPU router with a similar setup such as the RT-AX88U, for example?

L&LD said:
I wonder if the results would be similar with a 1GB RAM and 4 Core CPU router with a similar setup such as the RT-AX88U, for example?
Click to expand...

I expect it to hold longer due to double amount of RAM and options to run OpenVPN on a different core. Performance of something sooner or later will suffer though, those routers are not designed to be a NAS replacement.

I wanted to see the max transfer rates, so USB 3.0 mode. Never managed to reach over 55MB/sec though. In theory it has to go higher, but if nothing else is running on the router and a 3x3 client is needed (or a wired connection).
Inactive user since Apr 10, 2020

Now we know why people constantly complain something is not working. ASUS 50-in-1 router doesn't mean 45 of 50 options can be enabled in the same time. It has to be one or another, as per what is most needed. Run only half of what is offered in firmware and the new powerful ARM hardware, etc. etc. "beast"... is down.
Inactive user since Apr 10, 2020

Tx for all the replays.
I observed the same dropouts using slower computers. It looks the stronger the PC CPU the shorter the transfers are because more data is capable to be transferred and the router CPU cannot cope with it.
Yes NAS will surely help...
Router RT-AC87U Merlin 380.65_2

The interesting part is on the second screenshot.

When I cancel the backup, the data transfer is uninterpreted??? What the backup program should do is access the router and delete the partial backup file.
What actually happens is that it transferring uninterrupted data for quite a few minutes. THe farther is in the backup process the longer it takes.

Why this is happening??? Why suddenly the PC data doesn't saturate the router CPU???
Router RT-AC87U Merlin 380.65_2
You must log in or register to reply here.
Similar threads