Verizon Fios, ZenWifi XT's and how to best use Ethernet cables.

First thank you to the many folks who have posted various ZenWifi XT8 threads - it has been very helpful for me. I have some questions and want to break this down to most easily explain my house and what I had vs what I am able to do as of now (Thank you in advance and apologies if the below has been answered - I haven't been able to exactly find a solution):

Before I purchased the three XT units, I had three Apple Airport Extremes (6th and final model) all hardwired. The basement airport was connected to the older G1100 router and then the 1st and 2nd floors were connect via ethernet directly from Moca adapters (coax into adapter/ethernet out to AirPort Extreme) - the Apple units saw the signal and all was generally ok with the world. I had very few actual dead-spots but had the brilliant idea of upgrading to wifi 6 based on now having about five wifi 6 devices (with a couple more to come). In addition, I had read that the Apple devices were lacking in various newer security features, etc. So, after going down multiple rabbit holes and reading lots of reviews, I settled on the ZenWifi XT.

1. I can keep the 3rd floor unit as a wifi only device - the connectivity and performance of MOST devices, seem fine (I won't get into actual speeds).
2. I'm looking at the easiest way to bring an ethernet cable up from the basement - I have an old house and the ease of doing this is not so easy due to construction, etc.
3. Is there a way to use the Moca adapter to ethernet (with or without a switch) to utilize this already in place setup? I have tried and it won't work. Should it? I have spoken with Asus tech support and at first they said yes and then they seemed confused - they were not very helpful and I don't know if this hardware just won't work this way or not? If it doesn't, I guess that is fine and I'll either return them (unless if the reason the old apple routers did it just isn't how things work now...??).

The other issue which is very odd is a few of my RING devices can't connect to this new system even though they have greater output and supposedly greater range. I have the system setup with a 2.4Ghz SSID, and two 5Ghz. I'm having the Ring stuff connect to the 2.4Ghz as that is all they can understand plus it has greater range. I even added an additional Ring extender and it isn't working.

Any advice greatly appreciated on this - I feel I've spent way too many hours doing what should have probably taken an hour or so.

I have my two XT8's connected via MoCA and an unmanaged switch, no problem. MoCA is one of things that has to be wired up right to work well, and it isn't clear to me how you have yours connected. Can you provide a complete wiring diagram that includes the coax, splitters, router nodes, switches, etc.? That would be very helpful in understanding what might be going wrong for you.

I've also found that I get nearly the same throughput with wireless backhaul (no MoCA) and with the MoCA backhaul. So if your nodes are close enough together, you should get good results without the MoCA. The advantage for me to using MoCA is simply that I can have the 5GHz-2 4-stream radio be the client-facing radio, which results in a bit more overall throughput. But like I said, still fast enough without the MoCA interconnect.

No experience with RING, though.
S

Hi RogerSC - Thank you for your reply. Here is what I can gather (also attaching a few photos):

In the basement from the Fios ONT - There is a Coax out which goes to a 3 way splitter. From what I can tell, 1 of those goes into the Fios Router (G3100) and the other two go out and I presume get split a couple of more times as there are active coax cables in about 5 rooms. In the two rooms where the Apple routers worked fine, the coax was split again with one going to cable box and other to Moca adapter. The picture of the Moca adapter I'm posting has the coax coming in from the wall (presumably either one of the direct lines from the basement ONT splitter or a different split.) Then another splitter where you can see one line to cable box and other to Moca adapter with the grey ethernet cable. That ethernet cable was another that before plugged right into Apple router and worked perfectly - now, nada. Let me know if this helps.

Sorry, a wiring diagram isn't a few isolated pictures. A wiring diagram shows how everything is connected, splitters, coax, router, adapters, modem, and client endpoints. I can ask you if the MoCA adapter is MoCA 2.0 or 2.5? Do the splitters have a high cutoff frequency of >1675MHz., or do they have a cutoff of 1000Mbps? Splitters need to have a high cutoff frequency of at least 1675MHz. for MoCA 2.0 or 2.5. I assume that you've tested all the coax runs and have tried different cables in the process of troubleshooting?

Wish I could help more, but I can't really see what's going on from the pictures.
G

Why dont you change all the coax to ethernet? if those go inside the walls shouldnt be complicated, and the terminations are really easy, im a complete noob on that part and i was able to do it following instructions, to me internet is more important than cable tv, besides everything is streaming these days. im not sure if coax can handle 1gb and if youre paying for it.
G

About RING, their products sucks! i have about 5 cameras in the outside of my house and i had to put a XT8 just for them, and even with that sometimes the app shows bad connection.
S

Galaad - Old house makes a few places tough (nothing is impossible) to run ethernet directly to. Would like to utilize Coax as it worked fine before. Also - Ring only works on 2.4G and I got that aspect resolved.

RogerSC - apologies on what I posted earlier. I've done my best to capture everything I can find - please see attached diagram - hopefully more helpful. Again thank you in advance.

Oh, I know. My house is pure concrete and bricks, I paid an electrician to made the holes in the wall and another guy to fix those holes but it was worth it.

Have you checked if you can configure the IPTV part of the router? I live in mexico and was able to do it. Considering that we use older technology than Verizon I'm sure that something can be done
S

There is one toggle for On/Off for IPv6 - nothing fort IPTV that I can see. My IPv6 is disabled.
G

Go to LAN and should be there

OK - I see it. What are the settings I should have on/off? 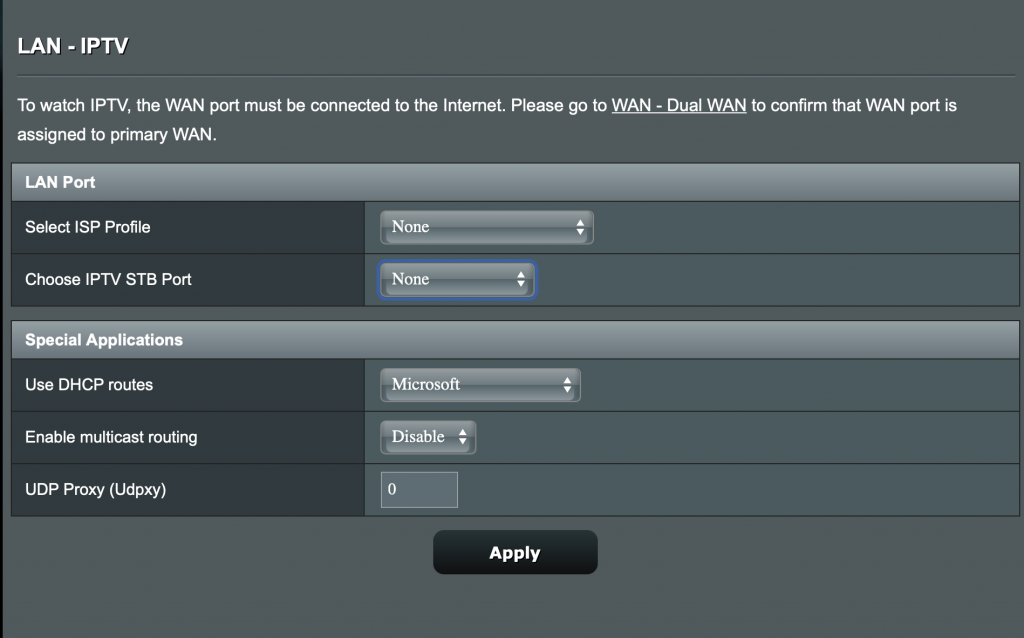 Every provider is different, but usually the first one is Verizon and the second one the port where you will connect the cable box.
G

I'm not given Verizon or Fios as an option:

Steven413 said:
Galaad - Old house makes a few places tough (nothing is impossible) to run ethernet directly to. Would like to utilize Coax as it worked fine before. Also - Ring only works on 2.4G and I got that aspect resolved.

RogerSC - apologies on what I posted earlier. I've done my best to capture everything I can find - please see attached diagram - hopefully more helpful. Again thank you in advance.
Click to expand...

I don't understand much about MoCA networks, but, the way I'm seeing your diagram the 2nd XT8 node is connecting to the FIOS equipment and not to the XT8 router.

Your other devices work on the Netgear switch because they're using the FIOS connection to the Internet and not through the XT8 router.

You'ld need to move some stuff around so that the 2nd XT8 node would communicate with the XT8 router "directly" otherwise it won't work.
S

I don't understand much about MoCA networks, but, the way I'm seeing your diagram the 2nd XT8 node is connecting to the FIOS equipment and not to the XT8 router.

If you look at Room #1 on first floor - the node is coming right off the Lan on Asus router to WAN on node - it works fine. I would like to move that node to Room #2 and use the Adapter as it is hard to get Ethernet into that room.
G

Steven413 said:
I'm not given Verizon or Fios as an option:
View attachment 36895
Click to expand...

Use the manual settings, then call Verizon to ask for the ports that you need to use.

Another question, why don't you use the wireless capabilty to create a mesh network? The first one has to be connected to the Verizon thing but the others can be wireless, they have 3 bands so you'll have 2.4 and 5 networks to use.

Doing some tests at my own house an XT8 and an AX89X were capable to create a mesh network and the connection said excellent.
S

At the moment, I do have the 2nd Node as a wireless connection - I just can't get it to go beyond a status of "OK" due to the structure of house hence why I would like to have it all wired.

"OK" meaning that the connection could be improved? Because even when wired (but with a 1gb switch) my XT8 said that.

I had to buy a 2.5gb switch in order to get excellent.

As long as the signal doesn't go below 50 you'll get a good internet. Remember that not all you equipment can handle 1gb in download 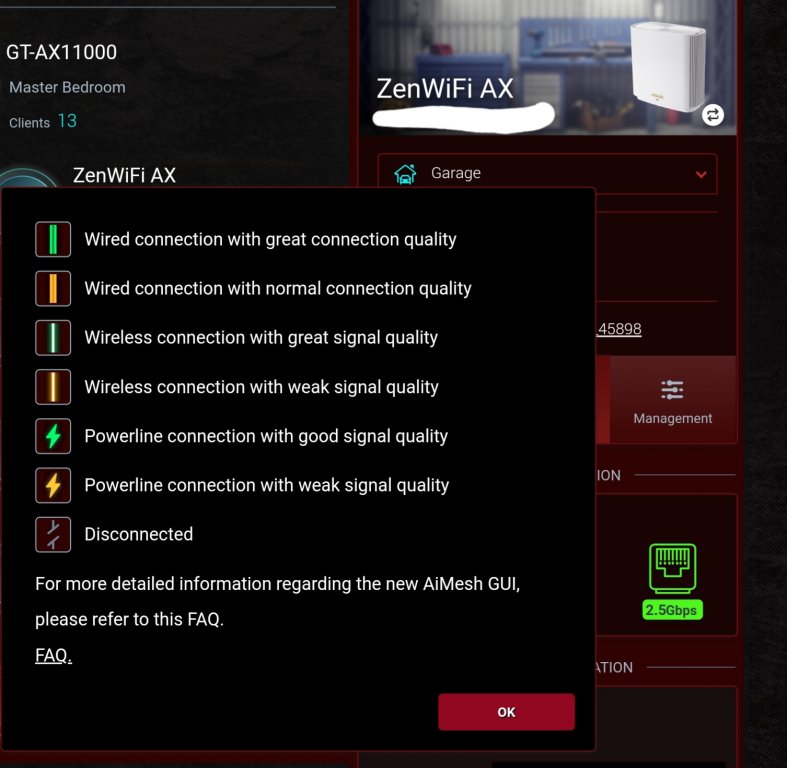