Hello everyone. I hope I have posted this in the right section rather than the ASUSWRT specific section.

Using VPN Director, it seems I'm in the same place in that to achieve this I'd need to create a separate rule for every device on my network, for every VPN interface (I generally have 3 OVPN client interfaces configured on the router) so for example I have network 10 devices I'd potentially need to create 30 rules (10 devices x 3 OVPN profiles) - and also create a specific rule also for the device that I only want to go through the WAN interface.

Notwithstanding that some of these use DHCP which means that those IP addresses might change, am I into a world of constant rule management? Also if I wanted to add a new OVPN profile then I'd also have to recreate another set of 10 or so rules.

So my question is (I guess) I there an easier way to exclude any single device to force it through the WAN, and have everything else go through the VPN interface(s)?

I hope that makes sense. If so, am I missing something obvious?

Many thanks in advance.

Svalbaard said:
I could not ever seem to create a rule (that actually worked) that simply forced one device through the WAN, and everything else to go through the VPN.
Click to expand...

To add to the question, what if I wanted to specific device (my TV) to go through a different VPN? My setting is like this, but it doesnt work - the specified device still uses VPN1:

You need to reverse the order !
First match is applied
RT-AX86U
RT-AC86U

Thanks, but that does not work unfortunately. As soon as you add a rule with an IP like xxxx/24, it will always add it to the top of the list - even when you have created a rule for a specific device before.

Update: I played around with it some more and also reversed the order of the VPN connections itself. I added the VPN that I wanted to use for a specific device first (VPN1), then the VPN that I want to use for all other devices (VPN2). That way it works like a charm. I guess this is what you wer trying to tell me?

My setup now looks like this, which works great: 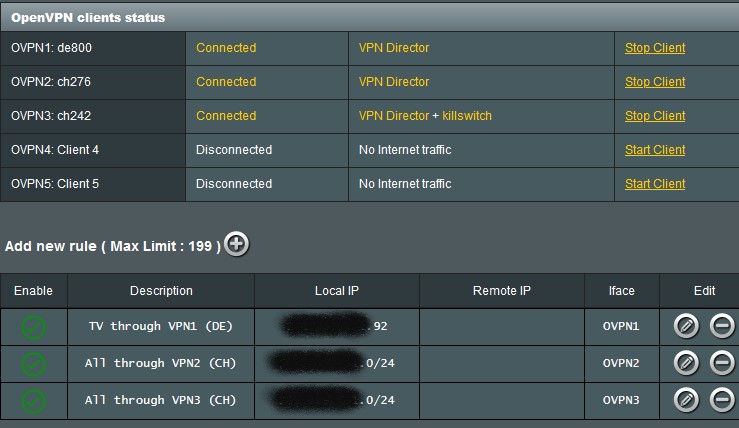 Sorry for the delay in response, but just wanted to thank you all for your help. Your combined advice worked a treat and I now have it all working as I want.

Thanks again.
Alea iacta est.
You must log in or register to reply here.
Similar threads