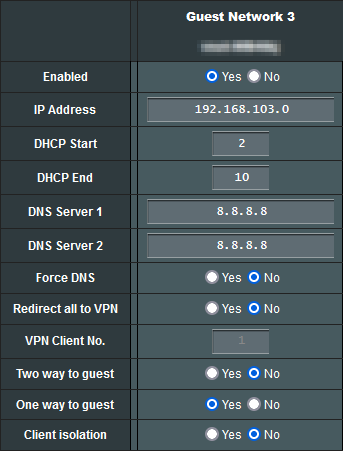 In addition, in Wireless -> Professional I have:
Set AP Isolated - No

In this case, on my network:
- the guest cannot ping LAN devices
- LAN device cannot ping the guest.
This situation is incomprehensible to me. I was expecting the LAN to see and connect to the guest. As expected.

And finally. When I turn off the YazFi add-on and set the option in the Guest Network:
Access Intranet - ON
then devices in both networks can see each other. As expected.
Last edited: Nov 26, 2021
M

Personally, YazFi is no longer installed at the moment.
Maybe for Mintoo it is still the case ?

In any case, if it can be a clue: I remember that when disabling the firewall in the Asuswrt interface, the problem persisted.
Last edited: Dec 8, 2021
RT-AX88U
386.2
You must log in or register to reply here.
Similar threads