Previously, I was testing on my stock firmware about AiProtection.
Nothing unusual happened when I played around with the settings.

Yesterday, I installed the latest Merlin FW on my RT-AC86U router,
Played around with the settings and things do not feel like running smoothly.

Today, I tested the AiProtection feature, and things got a little weird.
I applied the settings and the rolling wheel does not stop.
I was trying to turn off 2 way IPS but something was not right.
So I am a bit concerned with the stability of Merlin FW.

After waiting about 15 mins, this page was not changing, I had to close this page manually,
and then typed in the router IP on the browser to get access to the router's WEB GUI.
I went back to AiProtection > Network Protection and to my surprise, the system detected
something or someone attacked my PC: PNGECCTV 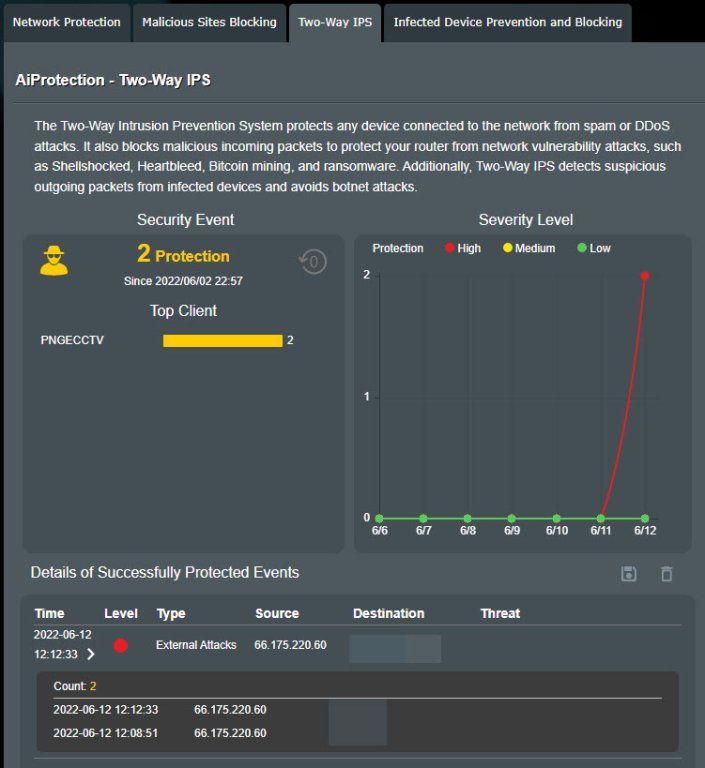 1) Can I downgrade FW Merlin? If yes, then can I use the stock FW saved setting CFG file to restore to the previous version of Merlin FW?
2) Even though I installed the latest stable release of FW Merlin, is there any other WELL KNOWN previous release that is known to be STABLE?
3) Would I need to monitor the RAM usage, it is currently at 75% used (This is understandable since IPS is turned on)
4) I was intrigued by this Youtuber, saying that a 2-way ISP cannot detect traffic in HTTPS, is true?
Testing - ASUS Router AiProtection
Last edited: Jun 12, 2022

I don't believe AiProtection is a true IPS. The CPU has not enough processing power to do that. Encrypted traffic can't be inspected. To inspect https the router/firewall needs to run a proxy. No such option with Asus routers. On device VPN traffic also goes straight through AiProtection, also encrypted. All I've seen from AiProtection is false positives - blocking sites with no real safety concerns. Both stock Asuswrt and Asuswrt-Merlin are faster and much more stable with no TrendMicro components involvement.
Netgate x86 appliance, Netgear PoE switch, Ruckus ZoneFlex PoE access points
Asus RT-AC86U and Asus RT-AX86U for Asuswrt and Asuswrt-Merlin experiments
You must log in or register to reply here.
Similar threads