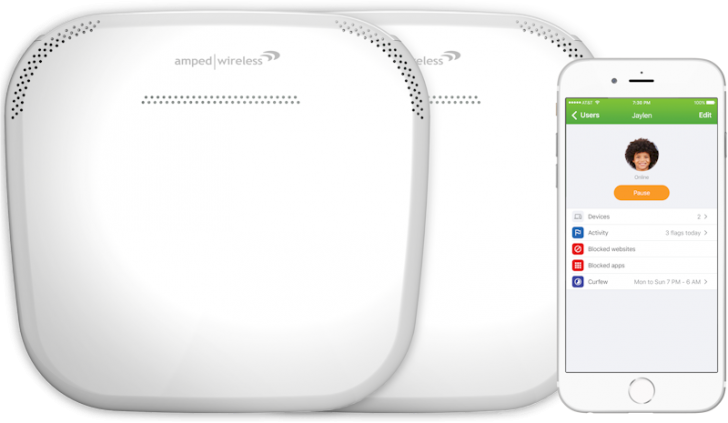 Updated - ALLY is Amped's entry into the replace-your-big-honking-router sweepstakes that appears to be the theme for new consumer Wi-Fi routers in 2016.


Amped comment: "The system is not currently positioned as a Mesh system simply because our kit only includes 2 devices. However, if in the future we add additional devices the system is Mesh ready. Based on the current performance and coverage from our high power technology we feel the 2 device kit will be more than sufficient for most customers."​
Both router and extender are 3x3 AC1900 class, with Amped's usual melange of high-power transmit and low noise receive amplifiers included. To increase WAF and in keeping with the small off-white rounded-corner box that is this year's router look, all ALLY 's antennas are internal.

As the rear panel photos below show, the ALLY router has a single WAN and three switched LAN ports, while the extender has only one port. All are Gigabit Ethernet. The extender's port is for device connection only; it can't be used as a backhaul link back to the router.

​
Other wireless features include MU-MIMO support and "seamless roaming". In another one of those dang disclaimers, however, we find "Connecting devices must support seamless roaming Wi-Fi technologies for uninterrupted seamless roaming between ALLY devices".


Amped comment: "For those devices that do not support 802.11k/v/r for seamless roaming we have intelligence to handoff legacy devices between the router and extender
and vice versa. It's not that non-supported devices will not be able to roam."​
Unlike most other "whole-home" systems introduced this year, ALLY has a working USB 3.0 port for storage sharing. It also has parental control and security features "secured by AVG" that are different than those mentioned when Innovation Labs by AVG launched its Chime mesh system on Indegogo last November.

Chime failed to reach its funding goal, but now we know what happened to it. Because buried down in the tiny ALLY disclaimers is found: "The ALLY app is provided by AVG and subject to the terms available at http://www.chimewifi.com/tos". While that link brings up only an empty directory listing, moving up to its parent directory takes you to a pitch for Chime's "Connected Home Platform".

AVG's pitch extols the virtues of Chime in that it "provides a freemium framework for selling premium subscription features, increasing lifetime per-customer revenue". ALLY's product description makes no mention of paid subscriptions, although the same disclaimer states "The ALLY app and its features may change without notice". However, an Amped Wireless spokesperson said ALLY requires no paid subscriptions.


Amped comment: "AVG is protecting connecting devices from Malware and other
harmful websites."​
You can pre-order both the router and router / extender versions of Ally today. Shipments are said to begin October 18.
Last edited: Aug 23, 2016
Tim Higgins
Managing Editor,SmallNetBuilder.com

it doesnt really explain how and with what tgech the extender connects back to the router , can only assume its the same way as the netgear orbi system with a dedicated 5 gig backhaul , but its not indicated

pete y testing said:
can only assume its the same way as the netgear orbi system with a dedicated 5 gig backhaul , but its not indicated
Click to expand...

thiggins said:
Not a good assumption
Click to expand...

the suggestion of a 3x3 antenna sysem and then another low noise set also suggest this , just not obvious from the blurb

edit - seems amped support doesnt know how the ally works as far as its connection so far but they did indicate they did not think it worked the same way as the orbi with a dedicated backhaul
Last edited: Aug 24, 2016
currently testing - asus rt-ax92u

No PoE or homeplugs included

Yeah, quite interesting that none of these have built-in HomePlug / power line support built-in...

lo pro joe said:
Yeah, quite interesting that none of these have built-in HomePlug / power line support built-in...
Click to expand...

That would give them yet another backhaul connection to manage. Would also make thermal design more difficult and push up material cost.
Tim Higgins
Managing Editor,SmallNetBuilder.com
You must log in or register to reply here.
Similar threads