I would like to upgrade my home with an Asus Wifi6 router.

Three questions occur to me
a) is the USB drive really limited to 2 TB as I read at asuswrt-merlin.net?
b) is HFS+ supported as stated in some Asus support pages (same post as below)
c) is Time Machine still supported as stated at https://www.asus.com/support/FAQ/1004458/?

As you can see additionaly to better WiFi coverage in this house with plenty of WiFi spots, I want to finally add a NAS system for all our Apple (and Windows) products, including backup via Time Machine.

Then buy a NAS instead of a router.

Welcome to the forums @christkind.

Your least-cost route with the most performance will be a router and a dedicated NAS (I recommend QNAP with 4GB (min) RAM and at least 4 drive bays).

Tech Junky said:
Then buy a NAS instead of a router.
Click to expand...

This I would like to answer after I know the facts. It wouldn’t solve my Wifi problems.
I like the idea of a capable router and the versatility of an alternative firmware. It’s more the linux approach that I appreciate.
regards,
christian
T

christkind said:
This I would like to answer after I know the facts. It wouldn’t solve my Wifi problems.
I like the idea of a capable router and the versatility of an alternative firmware. It’s more the linux approach that I appreciate.
regards,
christian
Click to expand...

Well, if it's WIFI you want then get an AP or two and make a solid WIFI connection in your environment.

If you like Linux you could use any flavor you want an a PC to make your own router to connect your AP's to and skip the whole router in a box idea completely and get better performance.

If you go the DIY router you just roll the NAS function into the PC by adding drives and configuring Samba to allow access.

The price differences are nominal if you plan it out before hand for which functions you want to use.

Say you went with a mid range router for $500 and wanted to connect a drive to the router over USB you're looking at another $200 for a decent drive. The router will probably choke if you do big transfers and require a reboot and / or corrupt your data.

Take the $700 above and use a PC instead to house the drives / NIC and hook an AP up to it for WIFI. Depending on how much performance you want from the PC as a router / NAS determines how much you'll pay. You could keep it simple and use a SFF PC for $150 add a quad port gigabit NIC for $50 and an AP for $150 for a total of $400. If you want to add VPN to the mix and have a gigabit WAN connection you can at line speed using a decent CPU with AES-NI enabled.

You could add more functionality if you want or keep it bare bones. You're not locked into a single use device any longer either. If you wanted to add Plex to it you could and stream from it internally on your LAN from the drives inside the PC. You can basically do whatever you want w/o having to replace things at a premium cost like you do with off the shelf options. If you want to upgrade from Gigabit speeds later on you just swap the NIC or add another one for $150-$200 or less if you just want to add a single port 2.5/5GE NIC because now you have a fiber connection that supports those speeds.
C

Hello Tech Junky, this sound interesting. For me it's a bit over the top right now.
I am aiming for a Asus RT-AX58U or even a Asus RT-AX55 that sells far below 100€ if NAS is too far fetched for the router.

I woud be happy to get those primary specific questions answered.
The one about Apple might be answered as newer macOS accept SMB instead of AFP but I'm not an expert on this behalf and like to keep computer stuff easy and low maintenance at home.
What about the 2 TB limit?
T

If you get a true NAS the 2TB limit goes away as they're designed to handle bigger drives. Right now the top end spinner is 20TB last time I looked.

Depending on your needs / desires for performance vs capacity determines which direction to go.

If you want to interact with the data and want some redundancy then moving to a 4-5 bay NAS would open some options for Raid to be used. These typically start over $400 for a 4-bay / $600 for a 5-bay

The pricing is where the PC idea becomes more palatable because the NAS only holds data and the CPU isn't powerful enough to transcode video files if you want a media library on your network. Of course those prices also don't include the drives.

Now, if you wanted to go the route you're implying of hooking storage up to the router itself you could use a DAS which doesn't have all of the fancy CPU/RAM/NIC inside and just uses USB or TB to connect to a host. A 5-bay DAS is only ~$150

The DAS usually doesn't do raid at that price though and would just show up as JBOD or separate drives and may/not work with a router as the host but, it's worth a shot. Amazon would be the easiest idea for testing as you can return w/o any penalty if it doesn't work as expected.

christkind said:
The one about Apple might be answered as newer macOS accept SMB instead of AFP but I'm not an expert on this behalf and like to keep computer stuff easy and low maintenance at home.
Click to expand...

AFP is deprecated on more recent versions of MacOS, and TM on Apple Silicon is over CIFS/SMB, not AFP.

I personally don't recommend using 'third party' solutions for TM, as Apple changes the code pretty much every major named release of MacOS.

Most recent change is going from HFS+ to APFS for the TM container file, and this along with moving away from AFP networking...
--
"How many lights?"

@christkind, a DAS is not a solution if you want more than one person using it concurrently and reliably. Let alone the issues you'll face as pointed out by @sfx2000.

Did you see post 3 above? Your expected budget for your requirements isn't in line with reality.

You need both a router and a true NAS to do what you're asking.

An RT-AX58U is not a suggested solution today (many reliability/usability issues in my experience, and its strengths are certainly not performance). The RT-AX68U is far superior.

You can get a capable router, but it will make a bad NAS and unreliable TM.


christkind said:
I am aiming for a Asus RT-AX58U
Click to expand...

This is not a capable router, but entry level model with intentionally built-in limitations.
M

I wouldn't trust the USB ports for anything more than occasional light duty.

With the latter, up to its last 382 firmware, I had years of trouble-free usage copying video files to it and viewing them on various devices.

By contrast, with the former, with the latest firmware, the USB feature has changed to treat RAM as a cache, which almost instantly consumes all the free memory the router has. Some say that's "normal," and nothing to worry about, but to the contrary, what I find is that if left in that state, it affects the network's functionality, dropping connections, forcing a reboot to clear memory and restore operation. I don't consider that acceptably normal in any respect.

Both routers have been used under the same circumstances, same number of users and devices, same storage drive even, yet whatever makes the AX86U different has also made it worse. A very simple configuration as well; no VPN, no QoS, or other functions that would tax it. Latest firmware, factory reset makes no difference.

Based on the AC56U, I was willing to spend more this round, and get a more capable piece of hardware, but that has proven to be the opposite, and it's frustrating to have to babysit a device that replaced the previous one that performed like an appliance and seldom needed attention, or force a new hobby.

There is one positive with the AX86U -- reboots take a much less amount of time.
G

I would like to upgrade my home with an Asus Wifi6 router.

Three questions occur to me
a) is the USB drive really limited to 2 TB as I read at asuswrt-merlin.net?
b) is HFS+ supported as stated in some Asus support pages (same post as below)
c) is Time Machine still supported as stated at https://www.asus.com/support/FAQ/1004458/?

As you can see additionaly to better WiFi coverage in this house with plenty of WiFi spots, I want to finally add a NAS system for all our Apple (and Windows) products, including backup via Time Machine.

If you want a router with excellent wi-fi range and very good USB/quasi-NAS capabilities, and would tolerate it not being an Asus, I would highly recommend the TP-Link Archer AX11000.
I've had mine for just over two and a half years - rock-solid, runs like a champ.
In terms of wi-fi range, it easily outdoes the Asus RT-AC86U and completely demolishes the Asus GT-AX11000, both of which I've had the misfortune of owning.
As regards USB... I've used it for more than a year with a 5TB external Seagate HDD (USB-powered, no less!) and a 1TB WD SSD (also USB-powered), which I've recently replaced with a 6TB Seagate Backup+ HDD (mains-powered). The screenshot below was made from my PC, which is hardwired to one of the router's LAN ports. 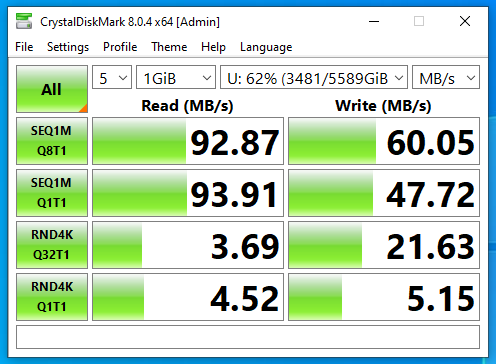 This may not be NAS-standard performance, but streaming, and the sharing of sometimes very large files, is flawless.
Also, the AX11000 supports Time Machine, but I've never used the feature, so there's nothing I can say here.

EDIT: Please keep in mind that the Seagate Backup+ HDD is extremely slow - 5,200 rpm - and spends half of the time going to sleep and the other half waking up. I actually got better CrystalDiskMark results from the USB-powered 5TB HDD, not to mention the SSD.

Last edited: Oct 26, 2022
You must log in or register to reply here.
Similar threads