However, when utilising the VPN the connection is limited to 47Mbps and I'd like to figure out why this is the case. It's worth noting that the same connection on my NAS tops out at the expected 100Mbps. Does anyone know why this might be?

One theory I have but I can't be sure as I don't understand entirely how a VPN functions on a router and the stress it could create, is that the CPU is not fast enough to deal with the speed. The reason I think this is that when running two back to back speed tests on the VPN the CPU graph looks like this: 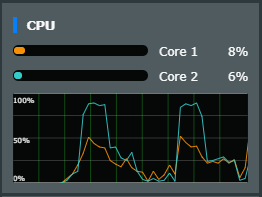 Perhaps my config is not setup correctly? Or perhaps I'm simply limited by the hardware.

If the hardware is the issue, is there better hardware I could use to get higher VPN speeds? Next week I'm due to get an upgrade to 900Mbps, which I'd like to utilise as much as possible using a VPN.

Okay, this next question is probably a silly one but...

What is the most powerful (and I guess therefore best) router Asuswrt-Merlin supports?
C

That's interesting and annoying at the same time

My NAS has a INTEL Celeron J3455 with a clock of 1.5GHz which doesn't appear to be much slower than the router I have with it's Broadcom BCM4709C0 @1.4GHz

Weggy said:
That's interesting and annoying at the same time

That's because the system architecture makes a significant difference too. Anything x86 based is going to make mincemeat of these consumer-grade routers, esp. when it comes to the VPNs, no matter how much they improve the processor speed. That's why the following beast is x86 based.

Vilfo is a VPN router that protects all devices in your network. Vilfo supports the majority of VPN services and over 30 are pre-integrated.

A couple years ago, I moved my OpenVPN client to a small form-factor PC I built from spare parts that were just collecting dust on the shelf. Motherboard is nothing special. In fact, pretty lame (only 1GHz, integrated processor), even by the standards of its day (circa 2011). But it absolutely blows away *any* consumer-grade router because it's x86 based.

So rather than constantly upgrading my router just for the sake of better VPN performance (I'm otherwise perfectly content w/ my ASUS RT-AC68U), I threw some parts together and handed responsibility for my OpenVPN client over to the PC (btw, it only consumes about 18 watts, so the additional cost of operation is still far less than the cost of having to upgrade the router).
Last edited: Oct 22, 2021
You must log in or register to reply here.
Similar threads