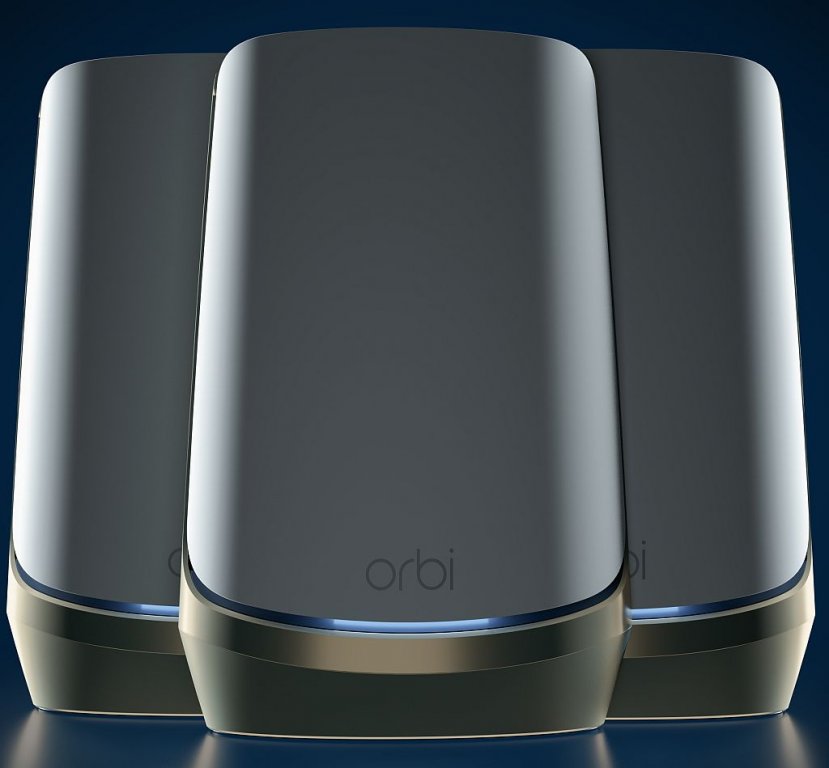 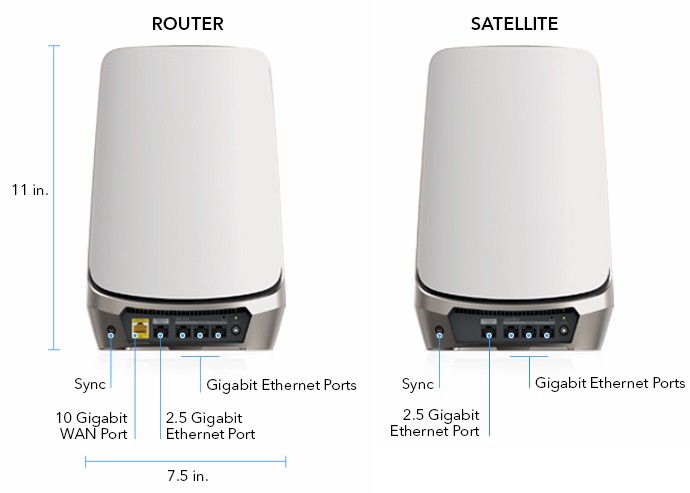 Like previous Orbis, the high-band 5 GHz radio is dedicated to backhaul duties, freeing the other three radios, including the new 6 GHz radio for servicing client devices. And like other NETGEAR routers and mesh systems, it comes with a trial of NETGEAR's Armor security suite.

All this new 6E Orbi goodness doesn't come cheap, however. The RBKE963 SKU (router and two satellites) will be available for preorder today in the US for $1,499.99 MSRP, and "shortly" in the UK on NETGEAR’s online stores, shipping "in time for the holidays". You can also get the RBKE963B Orbi WiFi 6E Black Edition for a limited time only (same price) on NETGEAR.com. The RBSE960 Add-on Satellite will run you $599 MSRP.
Tim Higgins
Managing Editor,SmallNetBuilder.com

TheLostSwede said:
I guess these things aren't made for people that want to use wired networking
Click to expand...

Correct. That is a very small % of the consumer user base.

Second 10 GbE port would add more heat load, with little sales benefit. Same for 2.5 GbE, but less heat.
My testing shows 5 GbE is a better choice to get the most out of 5 or 6 GHz @ 160 MHz B/W.
Tim Higgins
Managing Editor,SmallNetBuilder.com

thiggins said:
Correct. That is a very small % of the consumer user base.

I would say 2.5Gbps vs 1Gbps heat output is a zero sum game. Only Intel seems to list TDP for its Ethernet controllers and the different is so small that it wouldn't make a difference.

5Gbps seems to be a dead standard though, as there are only a couple of adapters, QNAP makes their USB one and I think there might be one other like that, plus one or two PCIe cards, so what's the point? How many routers have 5Gbps ports? I can think of one model from Netgear. How many 5Gbps (not 10Gbps with 5Gbps capabilities) switches are there? I can think of none, but Netgear has a multi-gig one that has one or two 5Gbps ports if I remember correctly. So even though it has obvious benefits over 2.5Gbps, it produces heat akin to 10Gbps, costs almost the same as 10Gbps adapters and offer no benefit over 10Gbps.

TheLostSwede said:
I would say 2.5Gbps vs 1Gbps heat output is a zero sum game.
Click to expand...

I have to take your word for it. Pretty sure it's not "zero sum" for cost, though. I do think a move from 1 Gbe to 2.5 GbE for standard switch ports will happen at some point. OTOH, given the relatively low usage of Ethernet ports by consumers, maybe not.

I can't argue that 5 GbE will be mainstream. NETGEAR RAX120, Linksys MR7500 and Linksys MX8500 are the only consumer routers/mesh systems I've run across. I'm just saying it's a better performance match for what the radios can produce.
Tim Higgins
Managing Editor,SmallNetBuilder.com

thiggins said:
I have to take your word for it. Pretty sure it's not "zero sum" for cost, though. I do think a move from 1 Gbe to 2.5 GbE for standard switch ports will happen at some point. OTOH, given the relatively low usage of Ethernet ports by consumers, maybe not.

I can't argue that 5 GbE will be mainstream. NETGEAR RAX120, Linksys MR7500 and Linksys MX8500 are the only consumer routers/mesh systems I've run across. I'm just saying it's a better performance match for what the radios can produce.
Click to expand...

As I only have Intel pricing, I can tell that each PHY is less than 70 cents more expensive. Obviously the switch IC is likely to add another $5-10 to that, but on a $1,500 kit like this...

Right, so two Linksys products in addition to the one from Netgear, that's not going to take the 5Gbps standard anywhere.
The radio matching makes sense, but I would rather see 10Gbps ports, especially as once again, on a product at this price point, it's not a huge price difference, or at least wasn't when Aquantia was running things and it doesn't look like Marvell has changed that much, based on add-in card pricing. In fact, the new AQC113 series should be cheaper for them to make compared to the AQC107.

Expect most new motherboards for Intel's 12th generation of Core processors to feature 2.5Gbps as standard, except the budget models, as it's a selling point for the motherboard makers. Realtek is likely to be cheaper than Intel anyhow, so we're most likely looking at less than $2 per chip from them, as Intel charges $2.40 and that's list price.

Anyhow, it is what it is, but hopefully someone will come up with a product for us "hardcore" users

In regards to power draw, just look at the average and max power draw on an Intel X710-T2L at 1, 2.5, 5 and 10 Gbps modes for example. (Granted Intel chipsets are pricy & unlikely to enter consumer models). Jumping from 1 to 2.5 Gbps is around a 25% increase in power draw, 2.5-5 Gbps modes are actually relatively close like only around a 6% power draw differential on that specific model. 10Gbps is a bigger jump around 25% over 5 Gbps. Those jumps would translate into greater heat as well.

Also if you have a switch with at least one or two 10 Gbps NBaseT ports doesn’t matter if specifically a 5 Gbps switch exists, decent selection with a mix of NBaseT ports.

Cost of multiple 10Gbps ports probably doesn’t make much sense in the consumer space (just yet) along with need for additional cooling, some of these routers already run pretty hot regardless of multigig, considering few will use the full potential of 10Gbps let alone even 5Gbps compared the numbers of a model sold. While things will evolve with more efficient chipsets and lowered prices for 10 Gbps at least my opinion is that right now 5Gbps would strike a balance between taking advantage of the radios capabilities vs heat/power/cost. I only know of two models that have dual 10Gbe NBaseT ports, the QNAP Qhora and the TPLink AXE11000. For high speed connections SFP+ is probably better.
Last edited: Oct 16, 2021
| ROUTER: SuperMicro AMD EPYC 3251 System (pFsense 2.5.0) | AP: Netgear RAX120 & Netgear RAXE500 | MODEM: Netgear CAX80 | SWITCH: Zyxel XS1930-10 | NAS: Netgear ReadyNAS 524X |

I am wondering which band is being used for the interconnection between the router and the satellite(s) of the Orbi RBKE960 series.

I tried the Orbi SXK80-series for some weeks and was not able to use the upper channels in the 5 GHz band (channel 100 etc). I suppose this band was reserved for the inter-connection task.
Also the maximum speed was lower than with my good-old NetGear EAX-80.

Flying Dutchman said:
Does anybody know which band/channels are reserved for this task? Maybe the new 6 GHz band .....
Click to expand...

According to the product data sheet: 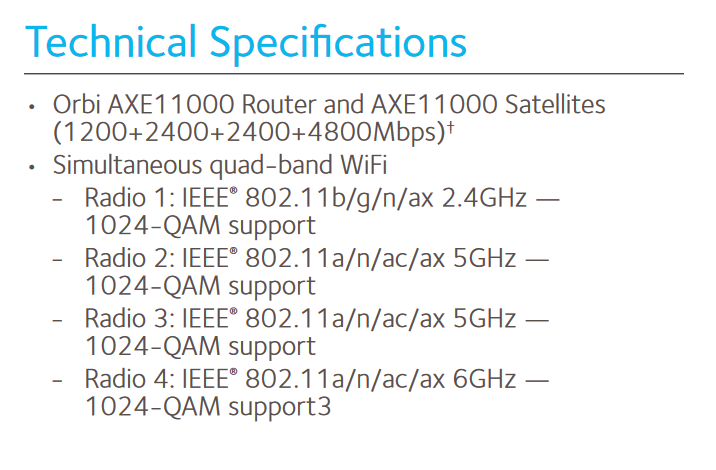 It would be a lot easier if they would state the streams on each radio. From what I know of the chipsets, to get four radios, they'd all have to be 2 stream. Of course, they are stating link rates at each band's maximum bandwidth, so that would be 2.4 GHz @ 40 MHz, each 5 GHz @ 80 MHz and the 6 GHz @ 160 MHz.
Tim Higgins
Managing Editor,SmallNetBuilder.com

Flying Dutchman said:
Still not clear if the channels used for interconnection are the higher channels (100 up).
Click to expand...

I think it's safe to assume they are. But I think the high-band 5 GHz radio supports only 149-161/5.
Tim Higgins
Managing Editor,SmallNetBuilder.com

I missed this post, lots of good stuff. At least from my perspective at least 2 2.5Gb ports on the router would make sense for wired backhaul and then you add one on each satellite. The advantage is that the satellites have more bandwidth for the devices that connect with faster WiFi. I’m sure it boils down to cost
You must log in or register to reply here.
Similar threads