Plume In a Three-way On Carrier Wi-Fi Mesh Systems? 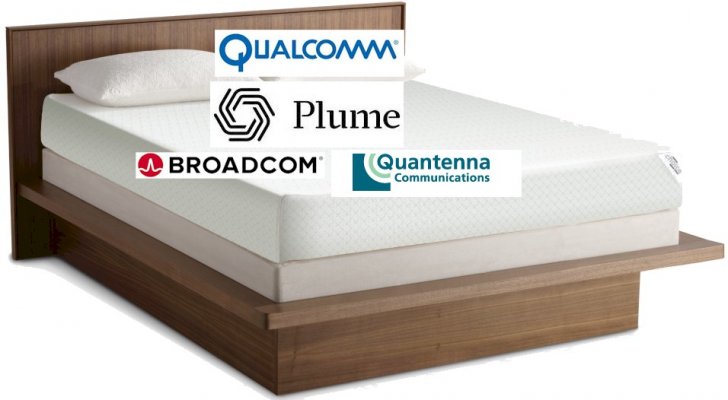 The Broadcom deal focuses on integration of Broadcom's Air-IQ and ZeroWaitDFS features with Plume's Adaptive WiFi Cloud Control and Management Platform. Also included is "pre-integration" of the Plume Agent onto "a broad range of Broadcom silicon platforms ... including ... the new Max Wi-Fi 11ax ecosystem". This includes Broadcom's BCM43684 802.11ax announced in August.

The design is aimed at producing a wall-plugged "Pod" similar to Plume's existing design that is less than 90 ccm in size and come with Plume's Agent pre-integrated.

Reference design licensees and current Plume Pod producers Sagemcom Broadband SAS and Cambridge Industries Group (CIG) of Shanghai are or will be soon cranking out the new Pods. According to the announcement, Sagemcom is "currently mass manufacturing and shipping Pods to multiple large carriers" and CIG "expects to ship Pods in volume starting in the first quarter of 2018".

There was no announcement of a similar deal with Quantenna using its new 802.11ax platform announced yesterday. But that announcement contained a complementary quote from Plume, which is usually a good indication that the game is afoot.

thiggins said:
The design is aimed at producing a wall-plugged "Pod" similar to Plume's existing design
Click to expand...

Speaking of the existing design; It has been out for almost a year, has anyone figured out which Qualcomm chips it uses yet?

Internet Man said:
Speaking of the existing design; It has been out for almost a year, has anyone figured out which Qualcomm chips it uses yet?
Click to expand...

They fuzzed out the chips on the FCC ID photos. No one has done a teardown yet. Plume told me all review units were out when I asked a few times for review.
I was going to buy a set, but had plenty of other stuff to test.
Tim Higgins
Managing Editor,SmallNetBuilder.com
A

I’ve been following Plume since launch; they are not launched in the UK but I was offered to beta test for an anticipated UK launch (that got delivered to SPAM so I never found out about it until too late).

The plug-in-wall form-factor has always appealed, as has the Ethernet port on the units. Keeps things all neat and out of the way.

Having the Plume agent integrated into ISP modem routers would be very good.

I was generally enquiring of all this to Plume and I got this rely:

“We are happy to hear you have been following Plume. We currently do not have a date of release for the Sagemcom WiFi, but we hope it's available soon.”

Google is generally very short of actual user reviews and YouTube doesn’t have any videos showing the plume in actual use by a end user.
You must log in or register to reply here.
Similar threads