Someone switched the sticker on this RT-AC68U from Amazon. What version is it really?

Bought an AC68U from Amazon Warehouse. Was excited when I saw the box said B2 and 1.4GHz, but the edge of the sticker on the back of the router was peeling which made me suspicious. That suspicion led me to discover that the actual mac address and WPS pin don't match those on the box or sticker.

I see both A1 and B1 in addition to rev 1.80 - which is it? Just curious what some scumbag switched out and sent back. 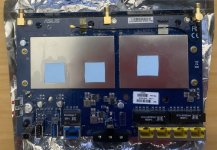 Can't see enough detail in the image. Can you upload a high resolution image somewhere?

You can check the CPU speed (assuming they haven't hacked the CFE) with cat /proc/cpuinfo
Click to expand...

The other side if it matters:

At the top there is a piece of tape that's reflection is obscuring the hardware revision number.

ColinTaylor said:
At the top there is a piece of tape that's reflection is obscuring the hardware revision number.

Yep, 1.80. Thanks. Warehouse be a treacherous mistress.
C

Sintek said:
Yep, 1.80. Thanks. Warehouse be a treacherous mistress.
Click to expand...

Just as an aside, this is a great example of why OEMs should NOT be reusing model numbers over many years for what is effectively a different router. Or else you incentivize this kind of fraud. It should be made visually obvious exactly what the user has, even it requires a small molding change in the plastic housing. Something beyond just a change in the sticker.
W

eibgrad said:
Just as an aside, this is a great example of why OEMs should NOT be reusing model numbers over many years for what is effectively a different router. ...
Click to expand...

It is good old practice for cars, airplanes and routers.
As of router the Linksys WRT54G is a nice example with 17 different hardware version sold under one name, followed by the WRT54GL which was again the same thing, but back to Linux opposed to the last G's with VxWorks.
For cars the Volkswagen Beetle, the 1303 is quite a different car with the shape of a classic 1200 from the 1950's.

The way to tell without opening the case is to see if you can see the inside directly from above the router, as there is no shielded on top of the antenna that affects heat dissipation.

ColinTaylor said:
Although I guess you've caused some noticeable damage to the case by opening it up.
Click to expand...

Actually, the front came off quite easily. No signs of damage from where the previous person removed it to switch the internals.

I've since bought an RT-AC86U, but I'll keep the AC68U since I like having at least one backup router on hand. It's not like an extra 200 or 400MHz from the CPU would have made any noticeable difference anyway, plus it was only $21 from Amazon Warehouse which I consider a damn good bargain.

Thanks for the responses.
You must log in or register to reply here.
Similar threads