I did one test with a WiFi 6 router and it was very frustrating for me. I wrote about its results to the manufacturer's support, and after a long period the support answered me, that the problem was not on their side, but global - in the OFDMA technology itself.

So I would really like someone to do an independent test and give their opinion. I would be happy if you could do it.

Unfortunately, I have no way to test this issue with other clients and other routers. However, TP-Link confirmed to me, that they also observe such a sharp drop in speed between two wireless clients when they turn on OFDMA.

I am sure this is incorrect behavior. OFDMA should not degrade the bandwidth of a network in which there are only two clients and both support OFDMA. However, I cannot conduct additional tests to understand who is to blame for this issue: the firmware of the router, the Broadcom chipset and its drivers, Intel adapters or the OFDMA technology itself.

I would be glad if you can help me figure it out.

Have a look at this series of tests by Tim Higgins.
https://www.smallnetbuilder.com/wireless/wireless-features/33222-does-ofdma-really-work-part-1
ASUS RT-AX86U
S

Thank you, I read it, of course. But, "Conclusion: OFDMA does nothing to improve aggregate throughput." and "My conclusion at this point is that OFDMA produces no discernable benefit for the average consumer."- this is not the same as degrading three times the throughput in my test.
OFDMA doesn’t just "not work", it does harm.
And I will also clarify.
If you do a similar test, but LAN->WLAN, if there is only one wireless client, then enabling OFDMA does not affect the WiFi speed in any way. Degradation occurs only when two clients work at the same time (and more, as I suppose).

Staff member
OFDMA has had a long development curve. Performance is very dependent on the firmware/microcode version in both AP and STA.

That said, I have never done a STA to STA test, so can't speak to the specific cause of the problem.

Are you using TCP or UDP traffic and what bandwidth are you setting? If you could provide the iperf3 commands you are using that would be helpful.

This could be a problem specific to TP-Link. If someone else could run a similar experiment with another manufacturer's router, that would be interesting. I can't do it at the moment because I temporarily do not have access to my test equipment.
Tim Higgins
Managing Editor,SmallNetBuilder.com
B

I have an ASUS RT-AX86U running ASUS (not Merlin) firmware. I have a number of AC clients and one WiFi 6e client (Intel AX210).
Even though I have a 6e client my router is only WiFi 6 so 6e does not get a go.

My mainboard (MSI Z590 etc.) just happened to have 2.5Gbps ethernet and the AX210 as part of the original equipment.
In fact, these items are not visible to a casual inspection because they are buried under several tons of heat sinks and coloured lights.
These coloured lights are causing me more problems than anything else. I'm still trying to stop them as I'm sure they must be adding to the global CO2 problem.

When I got the AX86U recently I had already read Tim's essays on the subject of OFDMA.
I did some testing with OFDMA on and off and my subjective opinion was that OFDMA increased latency.
I subsequently changed to Merlin FW and promptly forgot about OFDMA. Because of some problems, as yet unresolved, I am now back on ASUS FW at a later release.
I have not tested my Intel AX210 again because it is low on the priorities and my main connection on that machine is 1Gbps ethernet. Minimal latency there even though I am two ether switches downstream from the AX86U.
I just, to some extent, sit back and rely on others who are younger and have better knowledge to report these things. This approach usually works well.
ASUS RT-AX86U
S

The command I use is the simplest one:
iperf-3.1.3-win64 \ iperf-3.1.3-win64 \ iperf3.exe -c 192.168.1.70 -R -P 8 -t 30
The result does not depend on the direction server-client or client-server.
The TP-Link support answered me that the problem is not in their firmware, but at the global level. More detailed information has not yet been given to me. However, they are working on a solution.
And yes, the problem is visible only in tests with several simultaneously working AX wireless clients. This is most clearly seen in the wlan-wlan test.

Staff member
@BobD OFDMA works only with AX STAs and requires at least 2 STAs.
If you saw a performance difference using one AX STA with OFDMA on/off, either the AP wasn't correctly doing its job (a common problem in early versions of OFDMA implementations) or your measurement/test method is flawed.

@STNVIDNOYE TP-Link's explanation smells fishy to me. If the problem is not in their firmware, how/why can they work on a fix. Also what does the problem being at a "global level" mean?

Again, this test should be run on a different manufacturer's product. I suspect it's a TP-Link problem.
Tim Higgins
Managing Editor,SmallNetBuilder.com
S

I got further clarification from the support, but they do not clarify much. "According to information from the developers, this problem with OFDMA manifests itself on routers from other manufacturers and is related to the OFDMA technology itself. Therefore, it is quite possible that if you buy another router, you will encounter the same problem. The developers do not provide any other information." "Now the developers are faced with the question of eliminating this problem at the global level." Perhaps they are trying to figure something out in communication with chipset manufacturers ...
That is why I am writing here - I would very much like someone to repeat my tests both on TP-Link + Intel equipment and on other combinations of routers and clients. At the moment, I don't see a single wlan-wlan test for wifi6 and OFDMA anywhere on the Internet.

STNVIDNOYE said:
At the moment, I don't see a single wlan-wlan test for wifi6 and OFDMA anywhere on the Internet.
Click to expand...

STA-to-STA (WLAN-WLAN) is not a primary use case. Most users/providers are focused on downlink (AP to STA) throughput. Now that video streaming and video/photo uploads to social media are mainstream, uplink bandwidth is getting more attention, hence UL OFDMA and UL MU-MIMO in 11ax.

However, cable providers don't like to talk about uplink throughput much, since their systems allocate the bulk of bandwidth to downlink.

I hope to run a test with an ASUS, Broadcom-based router and two AX200 based STAs soon and will post the results.
Tim Higgins
Managing Editor,SmallNetBuilder.com
S

Well, everything is fine with the Internet in Russia. Many already have an Internet channel from 200 Mbps to 1 GB. In this case, the speed is symmetrical. Plus, many users have several clients at home, NAS, media players and other devices, so the speed within the local network, from client to client, plays a role. But if OFDMA really reduces the speed within the network by three times, and on the equipment of different manufacturers, then this, of course, is a complete failure.
L

Maybe OFDMA didn't assign enough resource units and that's why you got a slower speed.

We have lots of STA's connected (100+) so for us enabling OFDMA is like night and day. The difference really is that noticeable.

It doesn't seem to have any noticeable effect on actual download speeds. It's more a case of if someone's downloading, others are still able to browse the web without getting lagged.

Unfortunately, at the moment there are practically no independent tests. Therefore, it is unclear whether this problem concerns only the combination of tp-link->intel or broadcom->intel or some other equipment (router, chipset, client card) variations. It is possible that routers with a Qualcomm chipset do not have this failure. Or maybe he only has a TP-link.

I hope to have some data to share later this week from some experiments I have run.

I can already say that STA-STA throughput, even with OFDMA off, is limited to about half the throughput of a single STA. This is because 2X airtime is needed to move each packet from source to destination.
Tim Higgins
Managing Editor,SmallNetBuilder.com
S

Yes, that's understandable.
In the test with one client (LAN->WLAN), the Wifi speed is close to 1 GB - the limitation of the LAN port affects. But I will say more. If we take two wireless clients + two wired servers and simultaneously conduct two parallel sessions of iperf3 (LAN->WLAN + LAN->WLAN), then again - with OFFDMA turned off, the speed in each of the two client-server pairs turns out to be two to three times higher than with OFDMA turned on.
And further. If one of the wireless clients operates in the AС mode, and the second one - in AX mode, then turning ON / OFF OFDMA does not affect the speed of the wireless network.
I suspect a bundle of Broadсom's router chipset and two Intel wireless cards is to blame.

Unfortunately, I will not be able to repeat the tests in the near future - now I have only one client AX. But in the WLAN->WLAN test, this is exactly how it turns out - one client is DL, the second is UL ... I think it doesn't matter. Moreover, the TP-link does not make it possible to separately enable OFDMA UL or DL. There is only one switch - OFDMA ON/OFF
S

By the way, I use the following router settings:
Power high, channel 36, width 160, WPA2 / WPA3-Personal, 802.11a / n / ac / ax mixed
TWT, Smart Connect - OFF
MU-MIMO, WMM, Airtime Fairness, Zero Wait DFS - ON
I tried different combinations of these settings, but I did not find anything critical when turning them on and off. Only OFDMA behaves inadequately.

Staff member
Yes, for STA-to-STA, one STA runs uplink, the other downlink. That's why I'm suggesting duplicating the conditions for the single STA tests.
I do see a significant difference. I hope to be able to confirm this later today, using both Qualcomm and Broadcom-based APs.

I won't be running 160 MHz channels, however. I doubt that is a factor.
Tim Higgins
Managing Editor,SmallNetBuilder.com
S

Staff member
TLDR; There does seem to be a significant change in behavior when running simultaneous up and down traffic with UL/DL OFDMA enabled/disabled in a Broadcom-based AP that is not found with a Qualcomm-based AP. 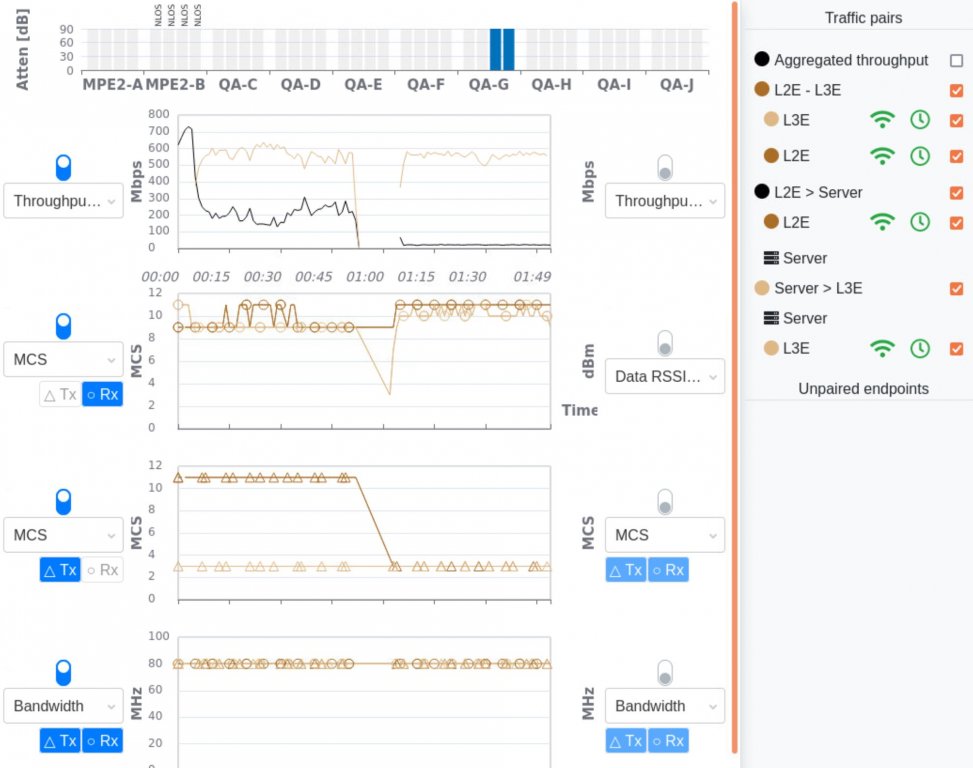 Now with AP octoScope Pal6 (Qualcomm based) configured as 4 stream AP. There is basically no change. 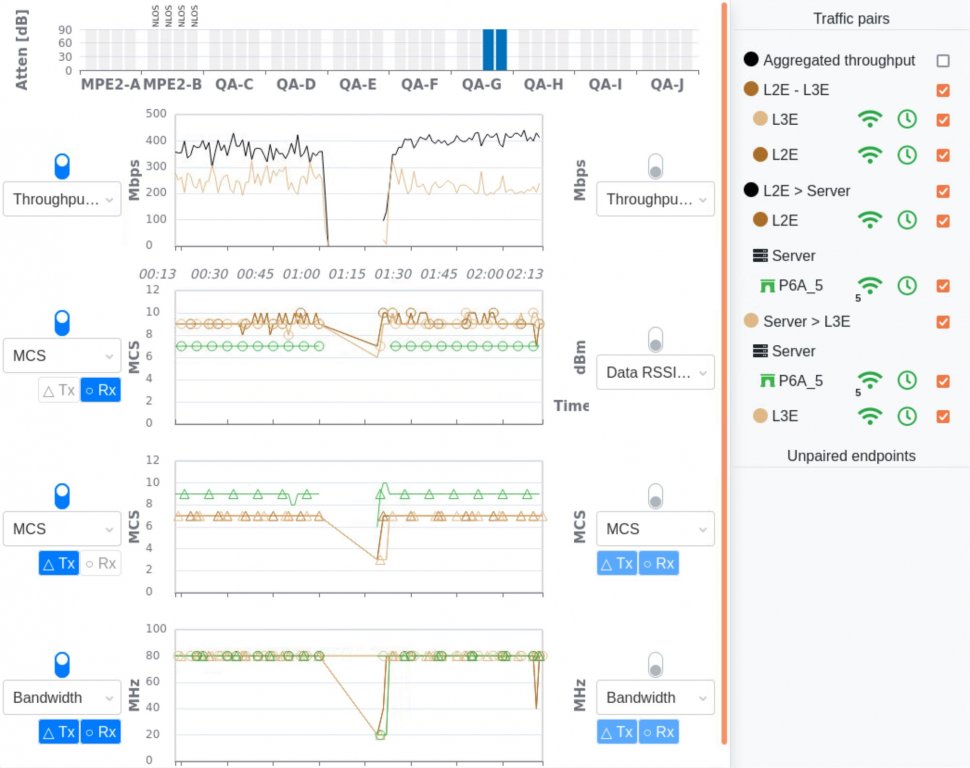 Since this is a single data point for Broadcom and Qualcomm-based products, I would avoid any general conclusions, other than it is possible that enabling OFDMA UL/DL can significantly affect throughput when there is simultaneous uplink and downlink traffic.

It also appears that at least one implementation of a Qualcomm-based AP does not show the effect.
Tim Higgins
Managing Editor,SmallNetBuilder.com
You must log in or register to reply here.
Similar threads