I posted previously about having an issue with the speed i was getting on wifi for this router, but things have moved on slightly and figured it would be better to start with a fresh thread.

Essentially, i have the Asus AX11000 router and a 900Mbps Fibre service, when using this router via Cat 6 cable, i get full speed, using Wifi (specifically, the 5Ghz_1 band, enabled for AX and 160Mhz and a link of speed of 1.9Gbps) i only get in the region of 600Mbps.

I have tried a variety of different distances and lines of sight and it all leads to the same conclusion that the router isn't capable of providing wifi faster than around 600Mbps. I know it should be capable of better, but i am not getting it so have to assume the unit is faulty?

I have tried several variations of the firmware and a few different AX enabled clients, nothing changes.

The one thing i did today, which is obvious when i think about it, is try two devices at the same time in a similar location to test the throughput of the router and wouldn't you know it, two device at the same time doesnt get above 600Mbps.

So, before i try to RMA the device, is there anything else that could be causing this such as a setting that i have missed?

I do not have Qos enabled, i am not using smart connect and the only slight glimmer of hope is that if i put two device on different SSIDs such as 5Ghz_1 and 5Ghz_2 and repeat the dual test, i do actually get somewhere closer to maximum, it seems to be constrained to providing more than 600Mbps per SSID at once

I used Nperf, Ookla, Fast.com and whilst those last two gave fairly inconsistent results as they always do, the overall picture painted using all three was as above 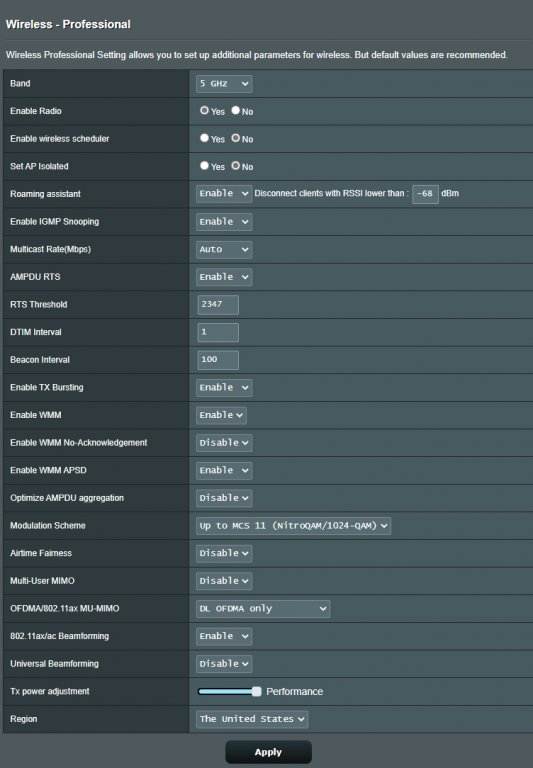 yeah, already tried those setting before, the only difference between those and mine currently was i still had multi user MIMO turned on, was set to DL/UL OFDMA + MU-MIMO and universal beamforming was still on.

For the sake of clarity though, i just changed to your suggestion, retested with one device only and there was no difference

Any other updates on this issue? I too am having the same problem.
(running latest DD-WRT (replaced stock fw after same issue occurred, see below)
Cat6 new cabling LAN, 1GB Fiber WAN

I've tried all default settings, settings per suggestion above, turning wifi off and direct connect 1 pc to the router, i've tried installing/removing AMTM, AI Protection OFF, (only made about 20 Mbps difference anyway), QoS off, Traffic Monitoring off.

Seems weird that I cannot get above 325 maybe 350 going to the Router (tried different ports, different pc, etc as well)

I've spent days on this and have tried to rule out any physical issue by using an alternate.

Any suggestions would really help.

L&LD said:
Am I wrong that DD-WRT still doesn't support hardware acceleration? That would explain your speeds.
Click to expand...

Not sure but I'm pretty sure I saw a screen that indicated acceleration, not sure what type though.

Try and download a game through steam and see what the download speed is. I notice since the att servers are not on speedtest anymore in my area I barely get over 700 anymore I stopped using speed test. I know downloading through steam or usenet servers I constantly see 90-112MB sec on my att gigafiber over wifi6.
I

IlmDude said:
Not sure but I'm pretty sure I saw a screen that indicated acceleration, not sure what type though.
Click to expand...

Hi, yeah HW accel is on. From SysInfo Tab...

This is Asuswrt-Merlin firmware, not DD-WRT. There is no DD-WRT for GT-AX11000.
Netgate x86 appliance, Netgear PoE switch, Ruckus ZoneFlex PoE access points
Asus RT-AC86U and Asus RT-AX86U for Asuswrt and Asuswrt-Merlin experiments
I

Tech9 said:
This is Asuswrt-Merlin firmware, not DD-WRT. There is no DD-WRT for GT-AX11000.
Click to expand...

sorry, that is what i meant AsusWRT, Im used to dd.

Asuswrt is stock Asus firmware. Asuswrt-Merlin is the RMerlin firmware, based on Asuswrt. You are running Asuswrt-Merlin on your router.
Netgate x86 appliance, Netgear PoE switch, Ruckus ZoneFlex PoE access points
Asus RT-AC86U and Asus RT-AX86U for Asuswrt and Asuswrt-Merlin experiments
I

Tech9 said:
Asuswrt is stock Asus firmware. Asuswrt-Merlin is the RMerlin firmware, based on Asuswrt. You are running Asuswrt-Merlin on your router.
Click to expand...

Thanks, any suggestions on what may be causing the difference in throughput from upload to download as mentioned, on the ax11000. Do you know of anything that I listed as installed that may be limiting the UPLOAD throughput to around 340 vs 940 DOWN on the LAN side (tested with iperf3)? I believe whatever is causing this to occur is limiting the WAN throughput as well. Thanks in advance!!
You must log in or register to reply here.
Similar threads