Time scheduling does not work anymore for some clients, however, it still works for others. It had been working fine for quite some time before that.
Those problematic clients connect via wifi (not sure this is a factor, their are Android phones so I cannot test them with a wired connection). As soon as time scheduling is enabled, their internet Connection is blocked, regardless of the time of the day. Even if the time management schedule is edited to allow every hours of every day, internet connectivity is still blocked. If the schedule is "disabled", the internet connection is restored as expected.


Setup:
- main router: RT-AC86U, now running on FW 384.18 but the problem appeared when running FW 384.17, maybe even on previous versions. JFFS not enabled (I ran diversion on it some months ago before but the router became unresponsive and I had to do a reset and reconfiguration)
- an RT-AC68U used as AiMesh node to extend wifi coverage, running same FW version as the RT-AC86U
- using the ASUS android app most of the time, rather than the web UI, to enable/disable as well as edit time scheduling

What I already tried:
- FW upgrade
- Router reboot. Turn on/off
- Disabling AI Mesh node and running only with RT-AC86U
- deleting time scheduling entries related to the problematic clients and recreating them
- testing with a schedule that allows all time slots


I guess my next step would be to do a factory reset of the router and reconfigure it completely. But I have some 40ish DHCP entries as well as a few openVPN configurations so I know it takes a while to do that...

Before I do that, I was wondering if someone would have an idea on how to debug this time scheduling issue further and try to find a reason for this unexpected behavior.

When searching around this issue on the forum, I found some older threads where people discussed that time scheduling did not properly stop ongoing connections or that NAT acceleration needed to be disabled (I do not see an option to do that on my router) but I could not see any post describing an issue similar to mine.

This happened very early on in ownership of my AX88U. I put up with this for months.

Then I decided to reset the router and default to factory settings. The last bit here is important, defaulting the settings.

Josh Opa said:
When searching around this issue on the forum, I found some older threads where people discussed that time scheduling did not properly stop ongoing connections or that NAT acceleration needed to be disabled (I do not see an option to do that on my router) but I could not see any post describing an issue similar to mine.
Click to expand...

I can confirm that time scheduling is working on my RT-AC66U-B1 after updating from 384.16 to 384.17 to 384.18 without resetting to factory default. It is in wireless router mode without any AiMesh system. Disabling hardware NAT acceleration has no measurable impact on throughput from my 100Mbps internet service, though presumably throughput will be impacted for much higher speed WAN connections, such as 1000Mbps.

Where can I find this on the Merlin powered RT-AC86U?
N

Sorry ChatmanR for late reply but I don't have AC86U. It may be similar to AC68U-B1, where you would go to: AiProtection - Parental Controls - Time Scheduling. The disable NAT acceleration link is there in yellow. 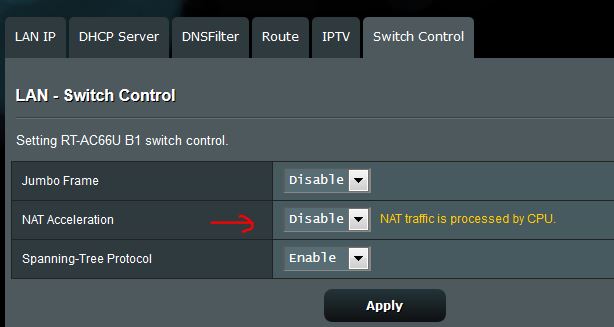