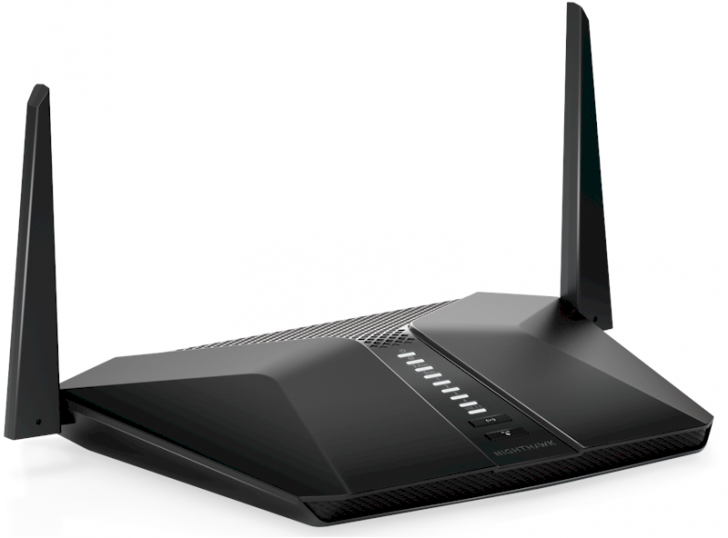 NETGEAR today took the wraps off its low-cost draft 802.11ax router, based on Intel's Wi-Fi 6 platform.

The RAX40 Nighthawk AX4 4-Stream AX3000 is a dual-band two-stream Wi-Fi 6 router supporting maximum link rates of 600 Mbps in 2.4 GHz @ 40 MHz bandwidth and 2400 Mbps in 5 GHz @ 160 MHz bandwidth. The RAX40 runs on Intel's WAV600 Home Wi-Fi chipset platform that includes a "powerful" (no clock rate was given) dual-core processor, 512 MB of RAM and 256 MB of flash. Port complement includes one WAN and four switched LAN (all Gigabit Ethernet) and one USB 3.0 port for storage sharing.

The RAX40 is the second Intel-based draft 11ax router to be announced, but will likely be the first to ship. ASUS announced its RT-AX58U at CES 2019, but did not announce pricing or availability. The RAX40 ships this month with a $199.99 MSRP.

NETGEAR also decided it's finally time to let its Qualcomm-based RAX120 Nighthawk AX12 12-stream AX6000 router try to make it on its own. The router was quietly non-announced back in November 2018 and has been available only through an invitation-only Premier Membership Beta subscription program up to now. You can now buy one outright, if you're willing to pony up the $499.99 MSRP.

Also missing MU-MIMO from the Spec sheet, since this is a 2x2 Router I guess it wouldn't matter anyway.

My only wish is that all router start bundling at least 2.5Gbps Ethernet Port.
I

Also missing MU-MIMO from the Spec sheet, since this is a 2x2 Router I guess it wouldn't matter anyway.

My only wish is that all router start bundling at least 2.5Gbps Ethernet Port.
Click to expand...

It'll probably support MU-MIMO since the RT-AX58U does.
B

AnandTech has a nice comparison table: 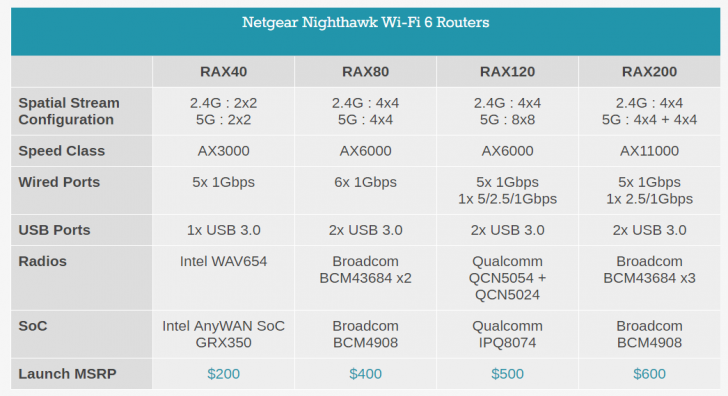 The table doesn't have the LAG information:

The RAX120 sports WPA3. Can that be added to the RAX80 and/or RAX200 via firmware updates?

One last set of questions. The RAX80 and RAX200 supports uplink and downlink OFDMA, whereas, the RAX120 only supports downlink OFDMA. What does that really mean? ... and can the RAX120 be updated via firmware to support uplink OFDMA?

The RAX 120 supports the Multi Gig port for both LAN/WAN use.

avtella said:
The RAX 120 supports the Multi Gig port for both LAN/WAN use..
Click to expand...

avtella said:
It also supports both LAN/WAN aggregation of the Eth 1 & 2 Ports.
Click to expand...

I only ask because none of what you claim is on their website or RAX120 datasheet. I assume you have access to an RAX120?

kc6108 said:
I only ask because none of what you claim is on their website or RAX120 datasheet. I assume you have access to an RAX120?
Click to expand...

Yeah I have one (retail from Best Buy, bought yesterday), and only the first two LAN Ports can be used either for LAN aggregation or for WAN aggregation.

Did you ever notice a benefit from it?
Tim Higgins
Managing Editor,SmallNetBuilder.com

I think MU will stick, Qualcomm chipsets (at least the QCA9984) seem to do it pretty well, looks like Broadcom’s improving its implementation as well, where’s earlier it was just a gimmick on Broadcom chips.

If I recall correctly I saw decent gains in some tests on the R7800 with two 9260ac laptops. Even the earlier SNB MU test showed pretty good gains on the R7800. Not something one would truly miss though at the moment. But with 4-8 antenna routers and newer ax devices with MU it might start becoming more useful in client dense environments.

avtella said:
Just note that connecting the multi gig port to the 10Gb BaseT will give only 1 Gbps link rate as the current 10Gb base T Ports aren’t compatible with the 2.5 & 5 Gbps link rates.
Click to expand...

I have a spare MS510TX sitting in the closet. I could use that between an RAX120 and my GS728TX, but I'd prefer to not introduce another switch between my firewall/router/gateway and main switch (right now is a GS728TX). All my Cat5e/Cat6 runs terminate into the GS728TX in my utility room.

The MS510TX has a slightly newer GUI than the GS728TX... and actually the GS728TX has a rather new GUI compared to other Smart Managed Pro models still listed in Netgear's catalog. For example, the GS724Tv4, which still requires Java to load the 'Device View' page.

Sorry for getting off topic, but I recommend the MS510TX for folks that get the RAX120 or RAX200 in order to make good use of the multi-gig LAN port... when it's not already used for a NAS or WAN duties anyway.

Staff member
MU-MIMO will stick around because the marketing guys don't want to give up a buzzword. Benefit from MU-MIMO is still marginal in real world use.
Tim Higgins
Managing Editor,SmallNetBuilder.com

I bought my MS510TX on sale for $209 at Newegg (Amazon was price matching) just a few weeks ago.

avtella said:
Yeah I have one (retail from Best Buy, bought yesterday), and only the first two LAN Ports can be used either for LAN aggregation or for WAN aggregation.
Click to expand...

I'm curious... what use is the WAN port when the LAN1/LAN2 ports are used for WAN aggregation? Are you able to use it as a LAN port? I'm curious how hardware acceleration is affected by all this?
You must log in or register to reply here.
Similar threads