Hi all, I'm hoping someone can help. My Google Wifi (GW) mesh performance has slowed ton a crawl lately. Even with all the pucks in the same room, I will get weak mesh connections. I know a bunch of people have similar problems, which they attribute to the latest firmware. I've tried trying to effectively create a wired backhaul by using Moca, but I need some help.

My provider is WOW (Wide Open West). 500/50 service. From the ONT, the coax coming into my family room is split into 1) the media gateway and 2) the Arris TG2427 modem/router.

I left my GW second puck attached to the TP Link unmanaged switch by ethernet.

The POE filter attaches before the first splitter in the basement, where the coax line comes in from WOW.

With this setup, most (but not all) of my home wireless devices will get on the GW network with a 192.168.86 IP address, and everything seems fine with those devices. However, many wireless devices (including my phone) will get an IP address from the 192.168.0.x subnet, not the GW subnet. The wired desktop computer also gets a 192.168.0.x address from the Arris TG2427. These devices are able to get online, but I'd like all my home devices to be on the GW 192.186.86.x subnet.

Here's another bit of information. Maybe it helps. For devices that are correctly assigned 192.168.86 IP addresses from Google wi-fi, I can access the Arris router settings by going to 192.168.100.1. This shows me the router settings as I've described. Bridge mode, DHCP off, firewall off, Wi-Fi off, and Moca disabled. 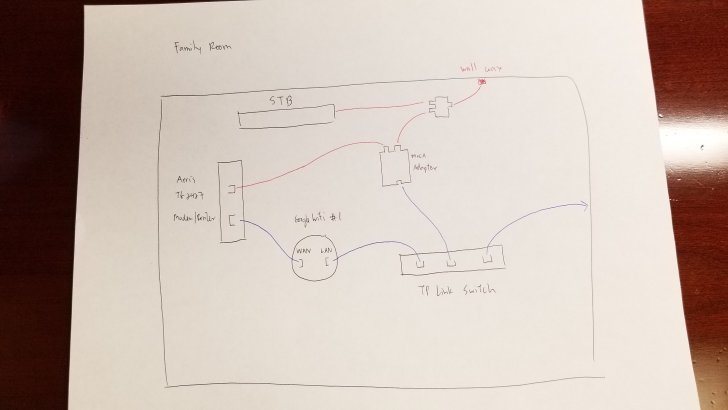 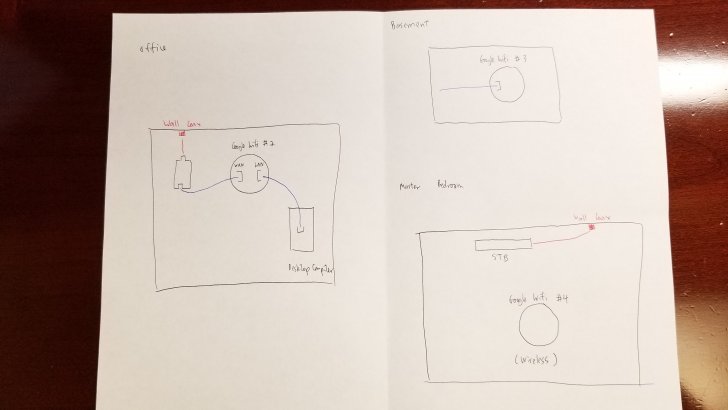 For anyone wondering what the problem was (like I did).

According to OP his MoCA "merged" with his neighbour MoCA, even though OP had a PoE filter in his house. A stronger/ different PoE filter seems to have fixed it.

I apologize for not updating here, as remote learning with multiple kids, while trying to troubleshoot the home network, is a rather exhausting exercise! Also, I updated on the Google forum, but my last post there was wrong too! Here is the updated final resolution (I hope!).

I know about computers/tech, but am by no means particularly skilled in home networking. I've been learning a lot along the way. As stated in the original post, when I would add in a Moca adapter into my network (ISP -> Arris modem/router in bridge mode -> Google Wifi mesh network), I would initially get beautiful results -- 500/50 at secondary Moca points. However, within an hour or two, various devices on my Google Wifi network (192.168.100.x) would start being re-assigned new IP addresses (192.168.0.x).

And if I used one of those devices to try to login to the Arris router (using 192.168.100.1), it wouldn't connect. Instead, I could connect to the router interface with 192.168.0.1. And the router web interface looked exactly the same -- Arris, so I initially thought I was accessing my own router. But then I noticed the wireless SSIDs were different -- in fact, I could see this other network's SSID passwords. The router I was logged into had a different IP address and MAC address.

I called my ISP thinking, this is going to be easy, I'll just give them the IP address and MAC address of that other router, and they'll know exactly who it is, and they can install a POE filter at their house. But my ISP said neither the IP or MAC address came up in their system! I kindly encouraged them to send a tech because this was a security issue -- definitely for the 'other' router, but maybe for me too.

The night before they sent out a tech, I installed a different POE filter -- I read that Tivo's POE filter has higher bandstop rejection, and that maybe this would solve the problem. I installed the new Tivo POE filter before my first splitter, hooked up the Moca network again, and lo and behold everything worked great! I messed around with the network for a couple hours, and no devices seemed to be getting assigned to the wrong subnet, so I went to bed thinking, it's fixed! (that's when I posted to the Google forum)

OF COURSE -- wake up the next morning, getting ready to start the remote learning, and devices are unable to connect to the internet, and some are getting the wrong IP address again. I was so disappointed. So I disconnected the Moca adapters and waited for the ISP tech visit. They came and checked the green box on the corner of my property, to find out which other neighbor could be leaking their Moca signal into my network -- turns out I WAS THE ONLY ONE IN THE BOX! What the heck!

At this point the tech was stumped. I showed him the router stats from the other router, proving that I was able to log on to someone else's router. We searched for Wifi networks nearby, and sure enough, the 'other' router's SSID was visible, with good strength, so it had to be someone nearby.

He was ready to give up and go ask for more help back at the office, when he decided to check one thing in my house. Turns out, this ISP provides cable TV through one box, and internet through a separate box (the Arris modem/router). HOWEVER, the TV box has a native router inside it! He plugged in an ethernet cable, and son of a mother, the darn 'neighbor' that was foiling my Moca plans for the past 2 weeks WAS MY OWN CABLE SET TOP BOX!

So it's no wonder that no amount of POE filters before the first splitter would have resolved this issue. I don't know why switching to the Tivo POE filter helped me problem for several hours, but it makes sense why it ultimately failed.

How about that sh*t?
You must log in or register to reply here.
Similar threads