YazFi YaziFi and Internet traffic mystery, someone can explain?

I started to use YaziFi just with someone suggestion it would achieve separate home network/IOT network without wrote those complicated VLAN/fw rules scritps and it did work very well in my case.
However I found some interesting things
1. YaziFi client are now on its own page showing their existence and not reporting on ASUS main client list
2. Network traffic between YaziFi client to main network consider as Internet traffic (upload?) on "Adaptive QoS" page

In my case, I have installed multiple Ip cameras and use open source zoneminder to manage them. The ZM server stays on main network because I need access it via VPN when outside. One camera is POE (not wifi) so it stays on main network as well ( I don't know if there is a way set its IP as all other ip cam's network). All other cameras join YaziFi network. See below 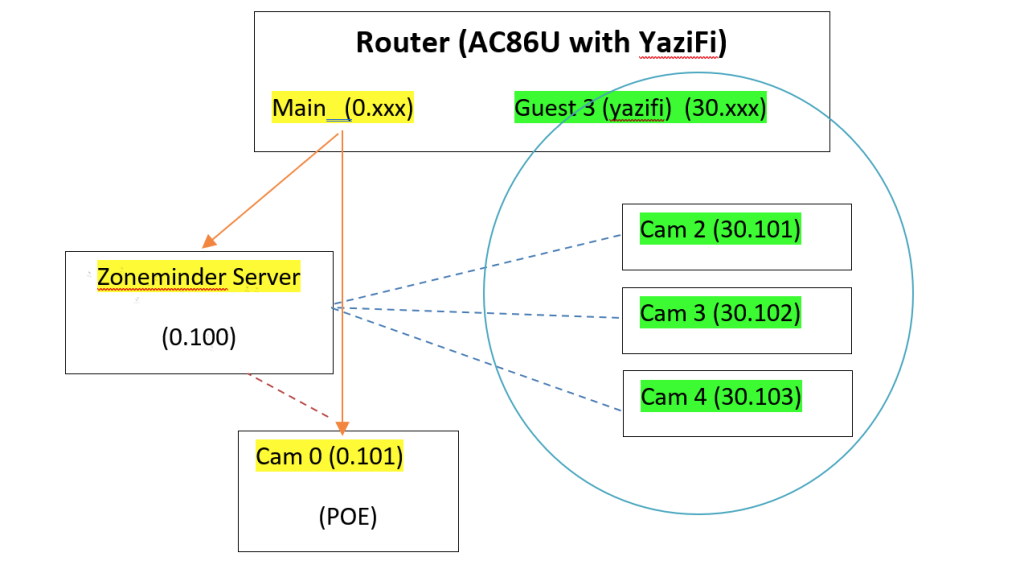 The fact that YazFi creates its own ethernet/ip network to support its clients is surely the reason these other features on the router get treated differently wrt QoS, bandwidth monitoring, etc. The router is unaware of these changes by YazFi, and is mostly like only concerned w/ the default private network (br0), and NOT the individual wireless radio(s) that are now being managed separately. So you're bound to have issues with these kinds of changes.

That's why the approach used by YazFi is imperfect. Ideally, it would also support VLANs, so the IoT network could support wired devices. But I'm aware this was simply too difficult for the author to support given the wide spectrum of hardware it would need to support, all of which have hardware-dependent differences wrt VLANs. So it remains a wireless-only solution.

Personally, I would have grabbed an inexpensive FT (FreshTomato) capable router (e.g., T-Mobile TM-AC1900 on eBay, $35-40 USD shipped) and daisy-chained it to the primary router LAN to WAN (respectively) so I had both wireless and wired options. And now the primary router would see and treat its WAN ip as just another LAN device that's on the private network (br0). It would also have its own firewall, QoS controls, VPNs, etc.

IOW, there may be better ways to solve the problem if you're willing to invest in some additional hardware. But most ppl insist on trying to have one router do it all. Years ago that was more important given the cost of equipment. But these days additional hardware is relatively inexpensive (some ppl may already having some old capable hardware just lying on the shelf).

Don't get me wrong. YazFi is great. It's an amazing piece of work and serves most of its users very well. But as long as it's running outside the knowledge of the primary router, it will never be a perfect solution. There are inevitably going to be "quirks" when it comes to its integration into the existing environment.
Last edited: Aug 11, 2022
W

Thank you for the input which I always learn something from you comment. Yes I understand the limitation and actually going to invest on new HWs include a new bare-bone mini PC (150 USD) for soft-router and some 2nd hand managed switch (20 USD each) to build VLAN solution. Still a lot to learn.
RT-AC86U merlin 386.5 main Router
RT-AC68U (got it recently for $18) merlin 386.5 serve as mesh node
TM1900 -> AC68U , ASUS fw -> real GUEST network router
B

webdriver said:
1. YaziFi client are now on its own page showing their existence and not reporting on ASUS main client list
Click to expand...

Well known issue commented on a number of times in other threads about YazFi when people ask about it. The Network Map doesn't show the YazFi Guest Network clients. Because of the nature of YazFi one needs to either look at; the YazFi GUI page, or at the System Log > Wireless Log page, or the YazFi CLI (option #2 in the CLI), or use SSH and issue the command "cat /var/lib/misc/dnsmasq.leases" to see the correct listing of YazFi clients.

What you are experiencing or seeing doesn't mean there is something wrong, just that the YazFi script is operating outside the programing of the Asus / Asus-Merlin GUI and certain Asus GUI features may not properly report on YazFi clients. It is what it is when using add-on scripts. If it a problem then use the suggestion(s) @eibgrad indicated. For some the benefits of the YazFi add-on script outweigh the various quirks (like those you describe) one may see in the Asus-Merlin GUI.

On a side note. @Jack Yaz has indicated elsewhere they are not; "actively developing anymore. I chime in on support requests when I have time".
Last edited: Aug 11, 2022
You must log in or register to reply here.
Similar threads