Status
Not open for further replies.

ViRUS2k said:
Probably already been answered but how in gods green earth can i get rid of these in my history log

ViRUS2k said:
Probably already been answered but how in gods green earth can i get rid of these in my history log

Xentrk said:
Those msgs appear to come from skynet. You can install Scribe and uiScribe to create a separate log file for these messages which makes the system log file much easier on the eyes.
Click to expand...

Jeffrey Young said:
Check your logging level on your firewall setting. Looks like you set to log dropped firewall hits. Set the level to none.
Click to expand...

Right on the money thanks guys for the help...

And this beta is nearing a week old, which is when Merlin's betas usually ripen into releases
N

Don,t know if any one has mentioned this yet, after updating to 384.19 on my RTAX88U, my router continues to advertise there is a new firmware update when there isn't. 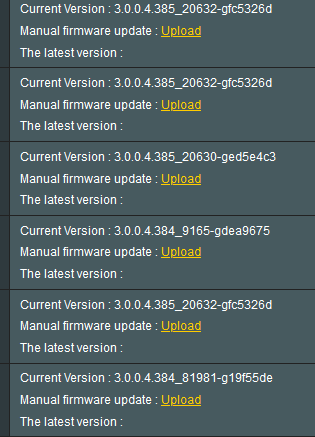 Only if the fixes were in the non-closed portion of the AC86U 384.81992 GPL. The rest of the AC68U is still running binary blobs from 385_20490, except for the mentioned bwdpi components, which is only a small piece of the binary goodness needed. ASUS hasn’t released a 68U GPL in a while.

Upgraded my AC68U yesterday.
No Problems - all running well (about 20 connected devices - all but 1 one wifi).
I noticed that Adaptive QoS (with FlexQoS) is responding quicker than before to limit multi-stream download spikes (e.g. non secure dslreports speedtest) so the short period of buffer bloat during ramp up are significantly reduced. I suspect that is part of bwdpi components from 385_20630 and a welcome improvement.
C

I installed this beta on 68U right now and LAN to WLAN (both directions, streaming from/to nas) traffic is still counted as internet up/down traffic on "Network Map" - "Internet Traffic" bars (first noticed on 384.18).

SomeWhereOverTheRainBow said:
Don,t know if any one has mentioned this yet, after updating to 384.19 on my RTAX88U, my router continues to advertise there is a new firmware update when there isn't.
Click to expand...

shabbs said:
Your current version is showing an Asus version, not Merlin. Merlin version would be: 384.19_beta1
Click to expand...

No i didnt include the beta part in the screen shot. 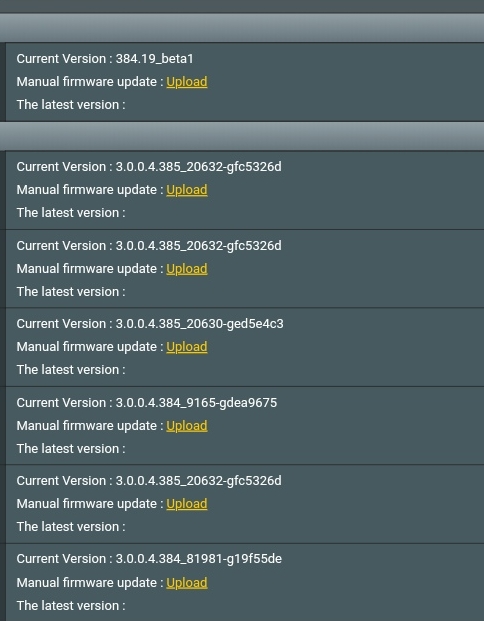 I happened to get a brand new RT-AX88U this week, decided upon that model specifically because of RMerlin's support for it (I'd been using a Netgear with the XVortex port of Merlin's asuswrt port) so it was out of the box factory fresh with 384.19_beta1 thrown on top. I ran into one issue which may be beta related, but more likely to be "my" fault and resulted in a "oh no, I broke it" experience.

It had barely been configured; it was not connected to my WAN, just sitting on my desk being set up. I'd gone through the wizard and got as far as the WiFi set-up for 2Ghz and 5Ghz networks, but other than that, had only got as far as setting the https listener and adding my SSH keys.

Somewhere along the way, with making minor config changes, it needed a reboot. When it did, it got stuck/wedged. Four lights on the front, one red, and nothing further. No icmp, no ssh, no http(s). Couldn't use it. Tried recycling the power multiple times. Nothing. Mild moment of panic before reading about the WPS button hard reset / factory reset, and, thankfully that worked, and returned me back to 384.19_beta1 unconfigured.

What I think did it, and it's a long shot that I'm not going to repeat: I had used the ō character in the 5Ghz WiFi name.

Initially, this didn't seem to cause any issues, as the network came up, and my iPhone saw it just fine. However, it was about the only truly non-standard thing I did, and as I was navigating around the configuration, I did see, somewhere, that the UI had escaped the ō character (\0whatever), and had done so for the entire network name. I am wondering if during the reboot when those characters were read out of nvram for maybe bringing up the WiFi that that's what caused the hard hang. I have no proof, it's just really one of the only things that I'd managed to configure. Needless to say, when I got going again, I made the ō just an o, and I've had no issues. Don't know if this is beta related or not, but thought I'd at least mention the hard-hang.

@honu, your theory may be correct (I don't know). But what I do know is that after flashing to RMerlin firmware, a full reset to factory defaults is required, for the router to 'see' and effectively use its expected defaults.

While you may have performed the reset and got the router to a usable state, you may want to bookmark the following link for future 'hiccups'. Specifically, the M&M Config and the Nuclear Reset guides.

Top 10 Simple Asus/RMerlin firmware powered Router Troubleshooting steps to try first: NOTE: Although this is for Asus/RMerlin-firmware powered routers, the steps below may be relevant to all routers, to get to a quick fix for common symptoms. Check that the router’s System Time is accurate on...

honu said:
Don't know if this is beta related or not, but thought I'd at least mention the hard-hang.
Click to expand...

To do this, this thread
ASUS RT-AX88U

Status
Not open for further replies.