Is there a way to install an external Fan that is regualtet how high the CPU temperatur is? Or generally which fans did you install and how is their Flow direction did you installed it under the router?

On my RT-AC87U I've opened it up and replaced thermal pads under three heatsinks with MX-4 thermal paste and increased pressure on retention pins to compensate the thickness of thermal pads. Temperature dropped on all radios and CPU for 10-15°C. Dropping CPU temperature from 80°C down to 65-70°C was significant.
A 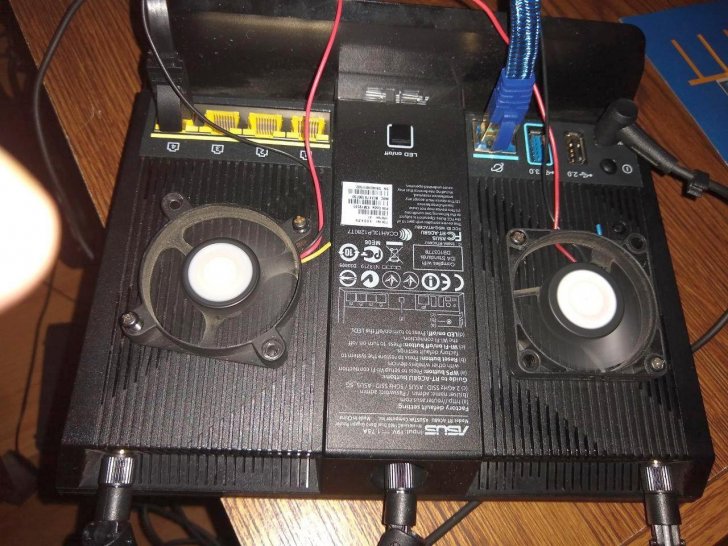 You might study the smallnetbuilder review, which tears down the innards. It looks like there had been a small internal fan at one point. Generally, it looks like the idea is for ambient air to enter the bottom, wrap around the board and over the top big heat sink and out the center top.

I was having heat problems with an 87U and got into it a bit. It has a similar design, and my anecdotal observation is that these flat routers are less efficient than the vertical designs like the 56U or 86U. But the 87U was particularly bad, because it didn't have enough openings in the top. It seemed like the idea was for hot air to leak out the sides. I took off the top and running it that way helped a bit but not as much as I expected. I put a pair of infinity fans on either side so that air was blown/sucked left to right across the board, and that helped a lot. I took off the heat sink and the shields and there were some problems with the thermal pads being misaligned, but not enough to make much of a difference. I ended up putting a small fan in the cover over the CPU and wiring it to one of the pinouts. That dramatically lowered the temperature, almost as much as the fans blowing across.

Unless you are going to install a fan, I wouldn't bother opening it up, and I wouldn't bother taking off the heat sinks or worrying with the thermal pads. I would start with a little Infinity USB fan on the bottom blowing up, which might help with the underside heat sinks but isn't going to help the top heat sinks. Then I would move it to the top, sucking out, and see if that helps. I expect that to be the best. They also have pairs of fans that you could hamburger the router with.
86U: 386.1b4b; diversion/pixelserv, scribe, Cake, skynet, unbound, uiDivStats, uiScribe.
56U: 384.6; diversion/pixelserv, scribe, FreshJR_QOS, skynet, unbound, uiDivStats, uiScribe.
N66U: 62_1; media bridge to 56U. 87U: Swimming with the fishes. N16: Stock; media bridge to 56U. GL-MT300N-V2.

I have an RT-AC86U in a room that gets rather toasty in the summer. To keep it cool I have a $10 clip mount fan just leaning against the back of it, blowing in. A swath of the missus's old pantyhose is used as a sleeve filter, which I change once a month or as needed. The router sits on a piece of tile as the shelf isn't quite level. Keeps the modem cooler too.

The noise level is negligible, as my pc (a tower, on the floor, next to the shelving unit) is louder.