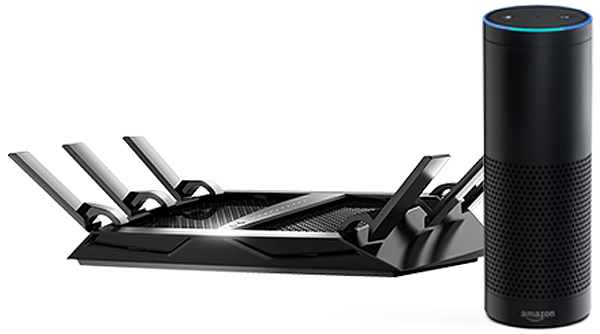 The new Broadcom-based Nighthawk has a 3x3 radio architecture, 64-bit 1.8 GHz dual core processor and three Wi-Fi offload processors designed to help improve data/processor intensive activities, such as video streaming and gaming. The AC4000 classing comes from the total of maximum link rates of 750 Mbps in 2.4 GHz and 1625 Mbps on each of its two 5 GHz radios.

Wired interfaces include five GbE ports (one WAN and four LAN) with port aggregation, and two USB 3.0 ports for connecting external storage to the router.

Other support features include NETGEAR’s genie app for remote connectivity and management to the router, ReadyCLOUD for adding accessible storage to the router, and Netgear ReadyNAS for storage management and configuration.

The NETGEAR Nighthawk X6S will be available at major retailers later this month for $299.99 MSRP.

Stream Faster. Game Stronger.
The Nighthawk® X6S AC4000 Router, with breakthrough Tri-band WiFi and multi-user MIMO (MU-MIMO) is ideal for simultaneous streaming to many WiFi devices in your home. The X6S offers the fastest combined WiFi speed up to 4Gbps, and is powered by a powerful 64-bit, dual core 1.8GHz processor with three offload processors. Enjoy fastest WiFi speed throughout your home with less lag and less buffering as you game, stream and surf. Access and control your router from anywhere using features such as NETGEAR genie® remote access, ReadyCLOUD® and OpenVPN®. Control your home network with voice commands using Amazon Echo/Alexa.

MU-MIMO on 3x3 and below is pretty much pointless. Clock for clock the A53 is slightly slower than even the older Cortex A9 but it's compensated by higher clocks in this model.
However it does have crypto acceleration built in. I personally am not a fan of dual 5Ghz radios.
| ROUTER: SuperMicro AMD EPYC 3251 System (pFsense 2.5.0) | AP: Netgear RAX120 & Netgear RAXE500 | MODEM: Netgear CAX80 | SWITCH: Zyxel XS1930-10 | NAS: Netgear ReadyNAS 524X |

How about none of the above?

avtella said:
Clock for clock the A53 is slightly slower than even the older Cortex A9 but it's compensated by higher clocks in this model.
Click to expand...

One has to be really careful here making blanket statement like that - take it from me - been there, done that, and had to backport ARMv7-a code back to a Cortex-A9 dual-core...

Cortex-A53 and A9 perform similar in many single threaded tasks - even though A9, some consider, is a 'big core'... comes down to the code, complier, and the work at hand - and most A9's are dual core, whereas A53 is generally deployed in a quad-core complex. Put the A53 into ARMv8 64-bit, and it generally will outperform the A9.

Cortex-A9 had a good run, but vendors these days are looking at bigger cores, and/or newer cores...
--
"How many lights?"

avtella said:
Well said sfx2000, but do you think networking vendors will actually optimize software to take advantage of the chip's features, hearing about how outdated a lot of the code in many consumer routers is, it makes me wonder.
Click to expand...

Starting to see it as the chipset vendors rollout new SDK's to support things...
--
"How many lights?"

It's good to see that the core chipsets are stepping up after a long period of stability (stagnancy?) - we've see great pace of development on the wifi side, but the core SoC's have been largely unchanged for probably close to 5 years now - clock speeds not withstanding.

What I would like to see is the other side - the client chips - it's not moving at nearly the pace of what we see in the AP/RouterAP arena. It's still far to often to see single band 802.11n N150 adapters inside the laptops in the bigbox stores...

Mobiles have improved, but most of the development there is to reduce power consumption - on the high end, we see dual-band 2 stream chips (some even with MU), but that tends to be the exception rather than the norm...
--
"How many lights?"

avtella said:
I saw a cheap ~$300 laptop at Target last year with a QCA 1x1 MU-MIMO adapter, proudly displaying MU support with a big sticker. It's getting there.
Click to expand...

Target is a bit above my price range these days

I put part of the blame on HP/Lenovo/Dell/etc on the low spec WiFi for Windows machines... and Windows is what most folks buy, even today... because they are cheap, and they are plentiful, and in many cases, the only choice.

At least Apple does spec out well, but their low-end stuff is spendy, oddly enough they seem to deliberately steer around MU - perhaps they know something that others don't?
--
"How many lights?"

Which pretty much is marketing (engineering speak for BS) - most folks will see N144/AC867 as this is where the client base generally is - on the very low end, N72, and I see bad things with $500 17" multimedia laptops with those adapters, even now...

The "AC class" system has been broken for some time now - sad part is that marketing sets bad expectations, compared to what most customers will experience.
--
"How many lights?"

avtella said:
Apple and Intel are late to the MU-MIMO party
Click to expand...

I think they just don't care... not a strong enough case to pursue dev - however, intel's 826* seems to support MU, not sure how well it does...

In most use cases - MU is picking up nickels in the parking lot - lot of effort for not much return.

The upside for the MU capable AP's - the resources needed to do MU right, that pays off for non-MU traffic just the same.
--
"How many lights?"

Apple still doesn't do Wide Channels in 2.4GHz - makes for problems using Bluetooth by restricting the number of BT channels available in a dense environment... Apple only uses BT for their Keyboards/Mice stuff, so in the workplace, it's a problem.

With their 11n Gear - they got some other vendors angst as they actively sent out fat channel intolerant bits on the beacon frames with their AP's - which for standards compliant devices, meant no wide channel love anywhere near by... they did change this stance for their 11ac gear, by moving this into the device association phases (probe request/response specifically, which made it clear, the AP ain't doing Wide, and the client says we're doing 20MHz only - less passive aggressive perhaps, but all in the 11n hairball of standards)
--
"How many lights?"

avtella said:
I saw a cheap ~$300 laptop at Target last year with a QCA 1x1 MU-MIMO adapter, proudly displaying MU support with a big sticker. It's getting there.
Click to expand...

Who is the manufacturer?
Tim Higgins
Managing Editor,SmallNetBuilder.com

Believe it was Acer, checking now, the $249.99 Spin 1 is sold at Target and it shows as MU-MIMO supporting on Acer's site so it might be that.

How about none of the above?

For most folks - a Wave1 AC1900 class device is going to be good enough.
Click to expand...

I dont think so. Even with Wave 2 router on wave 1 client. its hard for the 2 clients to get the needed bandwidth.

I mean who does more internet traffic. Its mixed traffic. People have NAS and multiple shares across pc's.

The best way to transfer is LAN but wireless always comes in handy.

Suddenly it dropped when i did a speed test of my 100Mbps line . ie 10MB/s dropped .

So it does implies even though the router can handle both clients needed bandwidth . But the client are old enough to not support MU-MIMO.

So the drops is un avoidable. but once the speed test of download done it is back to full speed of 30MB/s instantly.