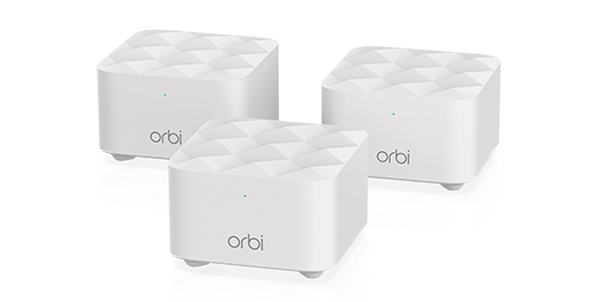 NETGEAR's new Orbi Dual Band Mesh Wi-Fi System is a three-node mesh Wi-Fi kit that lists for $229.99, or a little over $70 per node, making it cheaper than Google WiFi.

The new Orbi system is an AC1200 class dual-band Wi-Fi 5 (802.11ac) design, which means it's the first Orbi to not have a dedicated 5 GHz backhaul radio. The RBK13 kit includes one Wi-Fi router and two satellites, each powered by a quad-core 710 MHz processor, 256MB flash and 512MB RAM.

Physical interfaces provided on the router node include two gigabit ethernet ports (one LAN and one WAN). The satellites do not have an Ethernet port, so cannot be connected via Ethernet backhaul.

just a note here , both of the above are subscription based services
currently testing - asus rt-ax92u

Interestingly, the 3-pack wall plug system was on sale for only $170 yesterday. It's the one where you've got one regular base unit, and the two mesh units plug straight into outlets like the Plume: https://www.amazon.com/dp/B072ZN4PSB/?tag=snbforums-20

I wouldn't pay $230 for an AC1200 dual-band system at this point. That's too close to the price of much more powerful mesh systems, and well above the price of numerous excellent conventional routers with much higher throughput.
You must log in or register to reply here.
Share:
Email Link