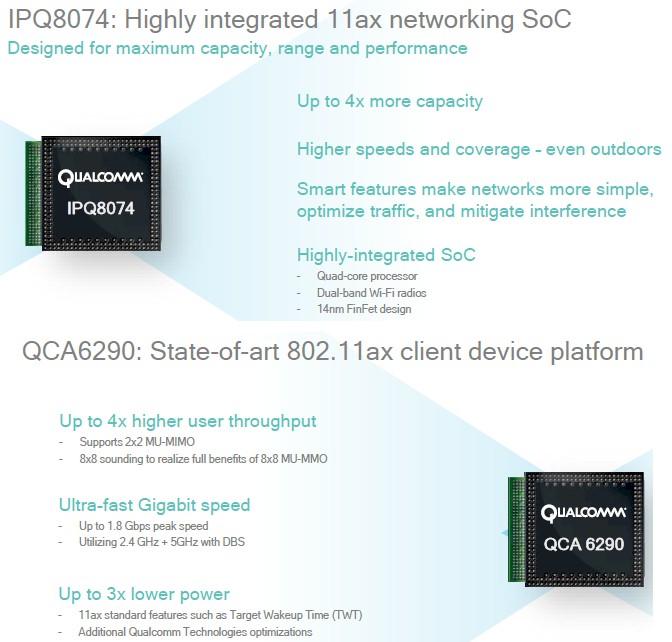 The introduction of the IPQ8074 SoC for access points and routers and QCA6290 for client devices make Qualcomm Technologies the first company to announce both AP and client devices for 802.11ax.

The IPQ8074 SoC combines a dual-band 11ax radio, MAC and baseband supporting eight 5GHz and four 2.4GHz streams and 8x8 MU-MIMO, quad-core 64-bit A53 CPU and dual-core network accelerator in a 14nm design. It also supports Qualcomm's Wi-Fi SON technology, which is used in many of the 802.11ac distributed Wi-Fi (aka "mesh") systems sold today.

Qualcomm Technologies expects to sample the IPQ8074 and QCA6290 in the "first half of 2017". Although the company did not say when the first 802.11ax consumer routers would appear, it would be reasonable to assume we'll see them in time for the 2017 holiday season.

It doesn't come automatically. The hardware supports it. Drivers will need to be developed to take advantage of it.
Tim Higgins
Managing Editor,SmallNetBuilder.com
I

It truly is. I can see device manufactures scrambling to create products that are compatible with it.

FWIW - after some review of 11ax - it'll be good for 11ax client stations - but the risk to 11a/b/g/n/ac could be pretty rough - and this comes down to airtime and the scheduled 11ax MAC vs. the unscheduled ALOHA MAC of the legacy clients/AP's - up to 11ac, everything was considered for fair time access and certain thresholds...
--
"How many lights?"
You must log in or register to reply here.
Similar threads